For the first time ever, Greece, which founded the Games and hosted the first modern Games in 2016, has since then not had a member on the IOC. 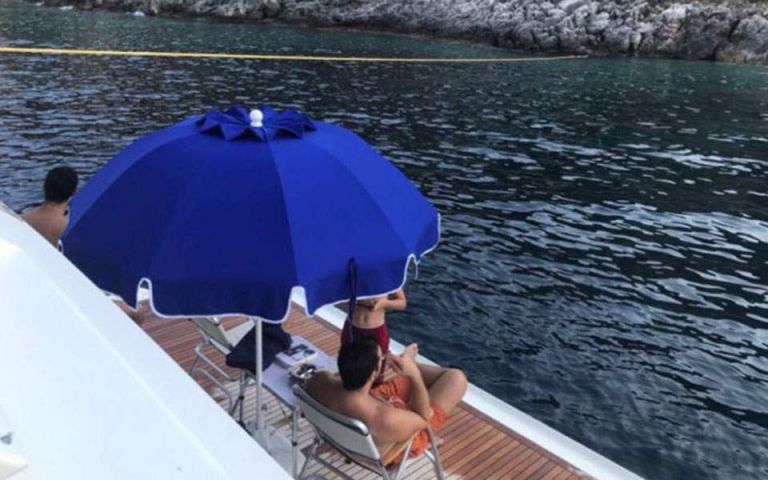 Responding to Prime Minister Alexis Tsipras decision to fly to Ioannina by commercial airline and not the state aircraft, New Democracy accused him of sheer hypocrisy as he had vacationed on shipowner Periklis Panagopoulos’ luxury yacht in August, 2018 and has yet to explain the circumstances surrounding the invitation issued by the late shipowner’s wife Katerina Panagopoulou.

Ms Panagopouloυ said she had a non-paid advisor’s position in the PM’s office and then he appointed her to the post of roving ambassador, months after his cruise with his family on her yacht, but that was not all.

For the first time ever, Greece, which founded the Games and hosted the first modern Games in 1896, has since then not had a member on the IOC.

IOC candidates must have served on their country’s national committee, which Panagopoulou had not.

Then in February, 2018, at the Korean Winter Olympics then culture minister Lydia Koniordou personally handed Bach a letter signed by Tsipras in which he requested that Panagopoulou’s appointment be approved at the next IOC meeting.

In a humiliation for the PM and by extension the country, Bach dismissed the letter as an unacceptable political intervention which essentially asked the Committee to break its rules for to make Ms Panagopoulou one of the “immortals”.

The opposition and media are hammering Tsipras for the fact that less than a month after 101 people in Mati were charred or drowned in the sea as they waited in vain to be saved, the prime minister was blissfully enjoying a cruise in the Ionian on a luxury yacht.

“Mr. Tsipras, who turned the Prime Minister’s state aircraft into a personal taxi, suddenly decided to travel on a commercial flight to Ioannina to be photographed with “the many” [SYRIZA’s electoral campaign says it is with the many].That is very kind of him,” ND said in a statement.

“Yet he lied once again, as always. He had the audacity to assert that he usually does not use the state aircraft for domestic travel so as to curb expenses, even though he used it for a recent trip to Kozani,” the statement noted.

Tsipras was asked by a passenger en route to Thessaloniki if the state aircraft was in disrepair, and he said he uses it only for meetings abroad with heads of government and state.

“We note that this is the same person who in 2015 said, ‘We are putting the government aircraft up for sale because the example of a plain lifestyle has to begin with us’,” New Democracy underlined. “He also changed the menu for the PM’s aircrft because without pasta with shrimp he found it poor”

‘Tsipras as Baron Munchausen’
“We hope that Tsipras – Munchausen in his interview tonight [a televised interview on Alpha television] will at least offer answers about his yacht vacation, about who paid for it, and whether he confirms reports that other government minister rested on the vessel after the Mati wildfire.”

In the interview, Tsipras defended his luxury cruis e and even declared that he would not have a problem if some of his ministers had also taken yacht cruises. He said he merely «accepted the invitation of an associate [Panagopoulou].

«I don’t think that is the problem of Greek society. That is their personal life,» the PM replied.