The PM’s “bridges” to the centre-left and his flirt with Social Democracy are secondary compared to the overarching goal of achieving a manageable electoral defeat. 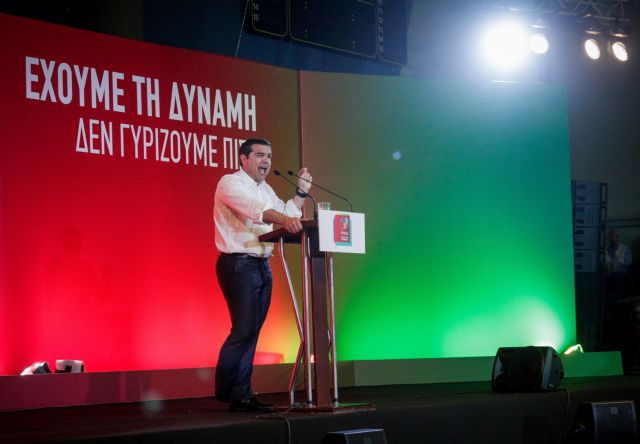 The man who was supposed to renew the country’s political life, PM Alexis Tsipras, kicked of his electoral campaign trips around the country with the very deplorable practices of the past which he once condemned.

Inseparable from his comrade and Alternate Health Minister Pavlos Polakis, he is cutting ribbons for public works which have been in operation for years. He announces new public works and makes countless promises in a bid to halt the decline of his party.

In the few weeks remaining until the European Parliament election we will witness a clash from the past. The PM has announced that he will turn New Democracy’s no-confidence motion against minister Polakis into a confidence vote in the government, as parliamentary rules allow, and that presages a bitter and intense political battle

The PM’s “bridges” to the centre-left and his flirt with Social Democracy are secondary compared to the overarching goal of achieving a manageable electoral defeat.

Mr. Tsipras’ unabashed support for a minister well known for his level of political culture sets the tone of the raging political battle. It is by now patently obvious that the PM has chosen the path of extreme polarisation in order to rally his dwindling political base.

On the one hand he is pledging handouts from that portion of the primary surplus that exceeds targets and on the other he is cultivating fear, division and tension.

History has shown, however, that no PM confronting a major decline in support has been saved by promises of social benefits and promises of better days.

With his tactics Mr. Tsipras is effectively turning the European Parliament election into a referendum on his political survival. He is essentially reviving his old slogan: “It’s either us or them.”

Unfortunately for him, voters no longer harbour illusions because they know the impact of his four years in power on their purses and the economy more generally.

People now know the meaning of over-taxation, exceedingly large primary surpluses, and the absence of social policy. They are not persuaded by the spectre of neo-liberal bogeymen.

However much the government cultivates polarisation and divisive dilemmas, the European Parliament election will determine its durability.