Erdogan had declared that he will keep the issue high on Turkey’s foreign policy agenda in the future, and that Turkey will not remain silent “regarding the military activity [of Greece] in violation of agreements [treaties] that provide for demilitarisation of the islands.’ 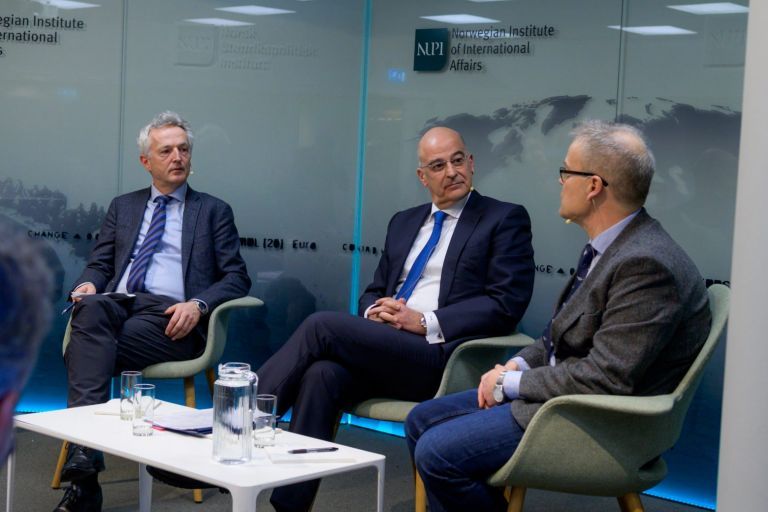 In his presentation, Dendias offered comprehensive answers to Turkey’s claims with maps illustrating Ankara’s flouting of the UN Convention on the Law of the Sea in the Aegean and the Eastern Mediterranean.

“Turkey, with specific violations [of the Law of the Sea], topped by the Turkish-Libyan memorandum [delimiting their Exclusive Economic Zones [EEZs], has chosen to ignore International Law of the Sea and has since 1995 declared a casus belli [if Greece exercises its right to extend its territorial waters in the Aegean to 12 nautical miles],” Dendias said.

The Turkish envoy –skewing the chain of events – retorted that the casus belli was issued by the Turkish Grand National Assembly when Greece decided to pursue the delimitation of the EEZs and the extension of its maritime borders.

Çorman interrupted and challenged Dendias, who noted that all that he had done was to describe the realities in the Eastern Mediterranean.
Dendias’ tweet

The Greek foreign minister posted a tweet on the issues raised.
“

«Greece views the E. Mediterranean region as an area of stability& prosperity where all countries & peoples should be able to enjoy peace and security (lecture on “Implementing the UN Conv. on the Law of the Sea: the Aegean Sea and the E.Mediterranean as a case study”). #NUPI #Oslo,” he wrote.

Prior to the discussion, Dendias answered Erdogan’s steadfast, vociferous demands that Greece demilitarise certain ones of its Eastern Aegean islands.

Erdogan had declared that he will keep the issue high on Turkey’s foreign policy agenda in the future, and that Turkey will not remain silent “regarding the military activity [of Greece] in violation of agreements [treaties] that provide for demilitarisation of the islands.”

Greece’s military deployment on the islands is purely defensive and took on much greater urgency after the 1974 Turkish invasion and occupation of nearly 40 percent of Cyprus.

“They [Greece] may force us to publicly highlight these hot-button issues. That is why my [foreign] minister warned them on a lower level not to force us to raise these issues for discussion, and he did well to do so,” Erdogan said.

Following talks in Oslo with his Norwegian counterpart, Anniken Huitfeldt, Dendias underlined Turkey’s the significance of Ankara’stiming in raising its claims.

He stressed that Turkey is demanding demilitarisation of the island at a time when NATO should display unity in the protection of the territorial integrity of a country, such as Ukraine.

Dendias argued that Turkey is effectively questioning its very presence in NATO, as well as the fundamental rights enshrined in the United Nations, with a barrage of statements with no legal grounding.

Transcript of Dendias exchange with the Turkish Ambassador

The full transcript of the heated exchange posted on the website of the Greek foreign ministry is as follows:

AMBASSADOR FAZLI ÇORMAN: (Turkey’s Ambassador to Norway): It is a pleasure always to see someone from across the Aegean Sea.

MINISTER NIKOS DENDIAS: Thank you for being here Ambassador.

AMBASSADOR FAZLI ÇORMAN: It is my pleasure. Of course, what I heard is not very pleasant.

MINISTER NIKOS DENDIAS: I thought so.

AMBASSADOR FAZLI ÇORMAN: But, of course it is not me to counter all of your arguments. You have a counterpart back in Ankara that would be very happy to discuss all these issues with you. And here in Norway, in Oslo, we are not in a position to solve Turkish-Greek issues. But since you came here and told about these to the audience, I would like to point out a couple of pertinent issues with what you have said, Excellency, respectfully.

You are claiming, or you are saying actually, that Turkey is doing this and that, but you are missing one point; that all of these actions are in response to something you have been doing. So these are consequences. The Turkish-Libyan agreement was also a consequence of something that you also know very well. And the casus belli declaration by the Turkish Grand National Assembly was also a consequence that Greece was telling that they will go ahead unilaterally declaring the continental waters as 12 miles. And this would practically “lock” Turkish waters, Turkey’s ability to reach international waters, and Turkey will be locked into its own territorial waters. That is what you are imposing, or you are trying to tell Turkey.

During the negotiations of UNCLOS, Turkey was a persistent objector to the notion of the islands having exactly the same effect on the delimitation. Because on the Aegean case, it is impossible for us to accept this. The Aegean Sea is a very specific case, and as you were telling, one side of the sea should be able to look at the other side. And delimitation can be done only by the two.

So, in case of Turkish-Greek issues in the Aegean and all other issues, Turkey is in a desire of making true dialogue, solving it through dialogue. And I was very happy to note that next week probably there will be a new chapter of consultative talks between Turkey and Greece, at the Deputy Ministers’ level. And we are actually looking forward to solve all of these issues through dialogue. The Aegean Sea has two sides; there is a land mass on the other side that you are forgetting, that is called Asia Minor, you may remember it from history. And it is the landmass of Asian continent. You would totally like to ignore that. “My island has the same effect into the delimitation, as the landmass of Turkey”. So, this is of course impossible for us to accept and that is the starting point.

You were telling that you were ready to talk to Turkey on the basis of UNCLOS. And Turkey did not join UNCLOS because we cannot accept the situation in the Aegean as the solution. So, we are not able to have this dialogue on the basis of UNCLOS only. As the professor was saying, International Law can be one of the bases of solutions and the others are fairness, equality and mutual rights. If you are ready to accept or to take into account Turkish issues, Turkish rights and Turkish needs in this matter, we can all sit and talk and solve these problems.

And you also failed to mention about the demilitarised status of some of the islands that Ulf mentioned. That is also one of the issues that we would like to discuss when it is about International Law and application of it. I think that according to International Law, Agreements are part of International Law. Direct Agreements and Lausanne Treaty and 1947 Paris Treaty asked you not to militarise some of these islands, which is not acceptable. There are many others but this is just as a beginning.

DIRECTOR OF NUPI ULF SVERDRUP (MODERATOR): Ok, thank you Ambassador. Minister, would you like to respond briefly…

MINISTER NIKOS DENDIAS: I will.

DIRECTOR OF NUPI ULF SVERDRUP (MODERATOR): In some sense, it is an invitation to talk on the conditions…

MINISTER NIKOS DENDIAS: I will. First of all, I want to thank the Ambassador -I said it before- for being here today. Of course, there is no question, so, directly, it was rather a statement.

But, in a way, Ambassador, I would also like to thank you for verifying exactly what I said. Because in the essence, if you allow me to repeat, you said that «it is legitimate for Turkey to issue a casus belli against us, a threat of war. If…»

MINISTER NIKOS DENDIAS: Well, being a diplomat, I take it that interrupting is not within your rules of conduct. Now, I start again: You are saying openly to an audience and likely, also on the internet, that: «threatening with war any country is legitimate».

So if you will allow me to ask, not you, but Turkey -because it is not a personal issue- isn’t a casus belli exactly what is prohibited by the UN Charter? Does the UN Charter condition this prohibition upon your interpretation of what Greece said it could do according to what, to an International Convention, which 168 parties have subscribed to, with the proud exception of Turkey?

Is that a reasonable conduct of doing things in the 21st century? Is that really an invitation to a dialogue? Or is it a pure threat -and I could use much harder words than “pure threat”?

So, the truth is that the difference between Greece and Turkey are solvable. Under one precondition: that Turkey comes to the 21st century. If Turkey stays in the 19th century, if Turkey stays in the way that Suleiman the Magnificent was conducting affairs by having the armadas around the Mediterranean, then this is a no go.

It’s a no go, but, in my humble opinion there is the possibility that Turkey will change its ways and its understanding. Because I deeply believe that this is to the benefit of Turkish society. And if I am allowed to repeat myself, there is a huge dynamic that would exist if this issue has been resolved.

And, by the way, last remark, the Ambassador said that the “Turkish-Libyan memorandum” was a reaction to something. What was that something was not revealed to us. But again, the question is: how could an illegitimate reaction be acceptable? I mean, the real answer to that would have been: “no, you are wrong, the ‘Turkish-Libyan memorandum’ is a legal agreement”. I heard that it’s a reaction to something but, yet again, nobody on this earth can defend this “agreement” on legal grounds.

The legal point is exactly the same as if Turkey has delimited with Singapore, or by the way with Brazil, or with Patagonia or whatever. How can that stand in today’s world? Thank you.