Doukas said that the ND government, of which he was a member, after the deadly 2007 Ilia wildfire, was trailing in the polls before the general election but turned the tables by handing out money right and left – compensation [3,000 euros] for the fire-stricken. 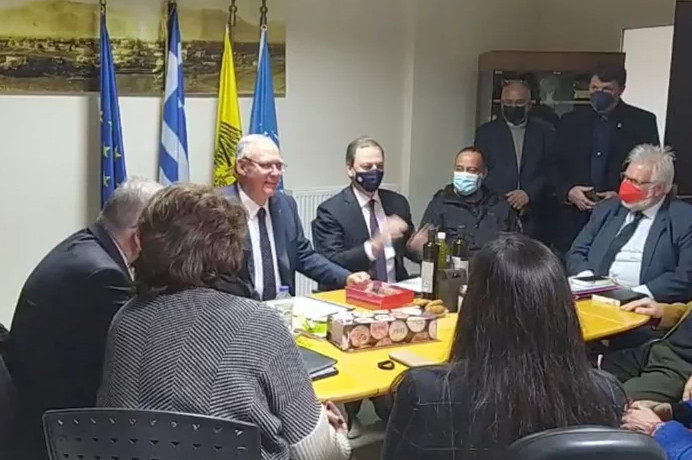 Ex-agriculture minister Spilios Livanos, who was sacked yesterday, has apologised to “those who believe they were offended” by his posture during a recent meeting in Sparta, at a ceremony today in which he handed over his portfolio to incoming minister Yorgos Georgantas

At a meeting (photo) organised by Sparta Mayor Petros Doukas that Livanos attended, Doukas claimed that the New Democracy government of which he was a member, after the deadly 2007 Ilia wildfire, was trailing in the polls before the general election but turned the tables by handing out money right and left – compensation [3,000 euros] for the fire-stricken [which was also claimed by many who did not even live in the area].

Livanos remained silent as Doukas spoke, did not challenge him and then uttered the word “epic” regarding the compensation operation, a term which Livanos now claims was “irony”.

Livanos today acknowledged his error and declared that he will not allow his career to be marred by the incident.

“We had gone to Sparta for one reason – to support farmers who were hard-hit by the recent frost. Before we began the scheduled meeting with the farmers in the regional government building, I accepted the persistent invitation of the mayor of Sparta for a brief, ceremonial meeting.”

“When he began to say all these outrageous things, which bear no relation to what I believe or to what truly happened in 2007, I found myself in a very difficult position, as did others who were present, I think. I felt uncomfortable. I felt I had to transcend what was said with an ironical comment and leave as soon as I could in order to attend the assembly of the farmers,” Livanos said.
.
“I used the word ‘epic’ with an obvious, especially for those who know how I express myself, ironical tone. It turned out that this irony was not only inadequate, but it was totally misconstrued,” he underlined. “What was needed was a clearly condemnatory approach. Obviously I made a mistake! I accept this criticism and I assume my responsibilities.”