In 2021, a record of investments was made in new products in this category, with orders over $4 billion 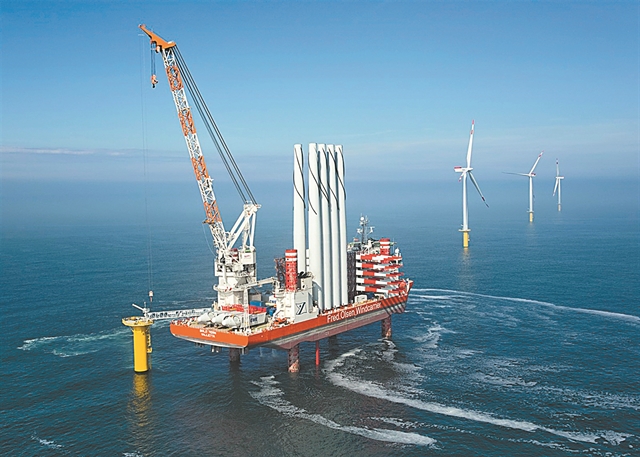 A new record was recorded in 2021 in the capacity of offshore wind industry, while the prospects for 2022 are also positive. Investments in new orders for newly built ships to install offshore wind turbines were also at historic highs.

According to Clarksons Research, 2021 was another record year for the offshore wind industry, with start-ups increasing global active capacity by 58% to a record high of 50.5 GW. In 2012, 84 wind farms were added, with a capacity of 18.5 GW and 3,400 wind turbines.

As a result of this development, offshore wind energy amounts to about 0.3% of the total global energy potential and is estimated that, at these rates, it could reach 6-9% by 2050 and produce 4,870 TWh to 5,990 TWh of power.

The purchase of wind turbines is on the rise

At the same time, the Wind Turbine Installation Vessel (WTIV) market continued to evolve, reaching almost 1,100 vessels by the end of 2021. Global WTIV usage averaged 83% throughout the year (6% increase on an annual basis), while strong demand for ships outside China held steady usage above 90% in the second half of the year. Tariffs were affected, with the average daily fare for 3rd generation WTIVs in Europe increasing by 18% year-on-year and quadrupling off the coast of Guangdong, China, in the middle of the year.

Moreover, in 2021, a record investment was made in new ships in this category with orders over $ 4 billion and an increasing focus on alternative fuel and energy saving technologies (ESTs). In particular, 17 orders (plus nine options) were recorded for WTIV ships worth about $ 2.5 billion, while orders were also placed (15 in number, most of all seasons) for specialized ships for the construction and operation of wind farms (C/SOV) worth $ 0.8 billion, and 39 contracts for the construction of personnel carriers (CTV).

The freight forwarder survey also found that China pioneered the addition of new capacity and surpassed the United Kingdom as the largest offshore wind energy market, with 16 GW connected to the grid, mainly in the last two months of the year, before the deadline for state subsidy, at the end of the year. The new capacity additions were more limited in Europe, as 1.8 GW was fully operational, with 17 GW currently under development in the region.