Presented by Bloomberg with lengthy excerpts today, the account documents the fact that the path to Grexit had been prepared both in 2012 and in the first six months of 2016 when Alexis Tsipras had come to power and Yanis Varoufakis was managing the Greek economy and supposedly preparing a clash and falling out with creditors. 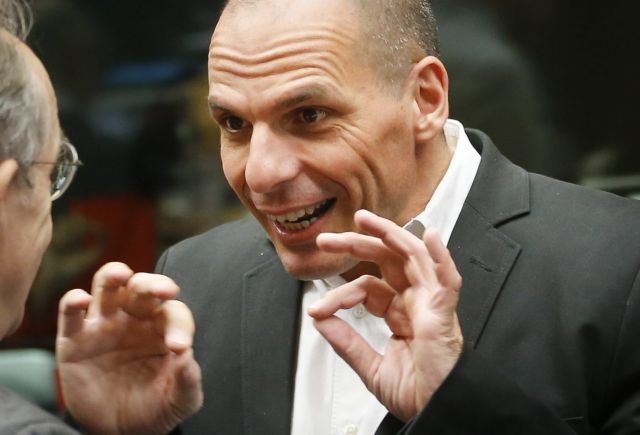 epaselect epa04818175 Greek Finance Minister Yanis Varoufakis at the start of a special Eurogroup Finance ministers meeting on Greek crisis at EU council headquarters in Brussels, Belgium, 25 June 2015. Eurozone finance ministers will reconvene on to assess the situation, before the European Union's 28 leaders kick off their two-day summit in Brussels later the day. A special meeting of the 19 eurozone leaders could also be held. Greece and its creditors continued marathon talks on how to avoid a bankruptcy in the country, just hours before an EU summit meant to bookend the crisis. EPA/OLIVIER HOSLET
Share

A top-secret Grexit plan designed by the ECB, the EU and its financial mechanisms has been detailed in a new book entitled The Last Bluff and authored by Eleni Varvitsiots, the Brussels correspondent of the Athens daily Kathimerini Eleni Varvitsioti and Bloomberg’s Viktoria Dendrinou.

Presented by Bloomberg with lengthy excerpts today, the account documents the fact that the path to Grexit had been prepared both in 2012 and in the first six months of 2016 when Alexis Tsipras had come to power and Yanis Varoufakis was managing the Greek economy and supposedly preparing a clash and falling out with creditors.

“Not till negotiations ended on July 13, 2015, did the EU and Greece agree to a third bailout. In the meantime, the EU’s preparations for catastrophe continued,” Bloomberg reported.

“A small team of 10 EU economists and lawyers huddled on the 15th floor of the Charlemagne building…. the 157-page “Albania Contingency Analysis & Plan, Sovereign Default 2015” was all about what to do to minimize the economic and humanitarian catastrophe should Greece be forced out of the EU and the euro zone,” the authors write, noting that the false reference to Albania was meant to mask the Grexit danger which would trigger an even greater disaster for the country and the eurozone.

“The second chapter, Managing Exit, looked at the stark costs of a Grexit. At that point, Greece owed €342 billion ($387 billion in current dollars) to the European Financial Stability Facility, the European Central Bank, the European Investment Bank and other euro zone governments… Plan B assumed that once Greece defaulted to a creditor such as the ECB, it would be impossible for the governing council of the ECB to continue to accept Greek government bonds as adequate collateral, and the ECB would need to call back the ELA it had given to the country’s banks. This would quickly trigger a series of events whereby the illiquid banks would almost immediately become insolvent and collapse,” the book states.

“The Bank of Greece would have to provide liquidity in a new currency—essentially exiting the euro zone.”

“This wouldn’t require printing new money right away. The practical part could be dealt with within hours, only requiring the central bank to change its information technology systems so it could convert the euros in bank accounts to its new currency. In a matter of hours, the Bank of Greece could convert everything. Contracts under Greek law would become redenominated, and civil servants and pensioners would have to be paid in the new currency, while taxes would have to be paid in it as well. The new drachma would depreciate against the euro instantaneously. For the currency change to become reality, “Greece will need to introduce new legislation,” the document said, “swapping euros under Greek law to the new drachma.” The currency would become the sole legal tender, and all euro deposits would have to be swapped to it, too,” Varvitsioti and Dendrinou note.

Paradox: Grexit would have required another bailout

“The paradox was that the only sure thing about a Grexit would be that the country would immediately need another bailout. It felt almost absurd, going through all this trouble to avoid a bailout, only to enter a situation where another one would be needed. “That’s the irony of the whole thing,” another one of the officials involved says. ‘No matter where you looked, there would have been a bailout. Maybe not instantly, because the government would say no, but very soon the reality would force them. It would be the only way to stabilize the currency and get a grip on inflation,’” the book states.

Humanitarian aid after destroying the country

“As the Plan B team was mapping out the legal, financial, and technical details, a separate team at the European Commission’s Secretariat-General worked on humanitarian aid. A default almost certainly would push many people below the poverty line and render them unable to cover their basic needs, including food and housing, causing a crisis not seen in Europe since the Second World War. Letting an EU member endure such suffering was inconceivable, especially as another crisis was brewing. Migration was further stressing Greece, with the government struggling to manage the influx of refugees from war-torn regions,” the authors note.

“Officials calculated that about 20% of the population—about 2 million people—would immediately face acute needs. This meant that the commission needed to create a safety net that would cover food, medical provisions, and even clothing. There were discussions about how to ensure that hospitals would continue to operate without having shortages of drugs. Another consideration was the possibility of fuel shortages. Even if the EU could ensure that fuel would be provided, arrangements had to be made to make sure that Greeks could pay for it….The officials soon realised that a minor change in EU legislation could enable Greece to use a pot of money from the bloc’s structural and investment funds. The mechanism for such aid was found, and the issue resolved,” the book states.