Conservative austerity versus SYRIZA social benefits and relief for the vulnerable is the ruling party’s new Manichaean political dilemma for voters. 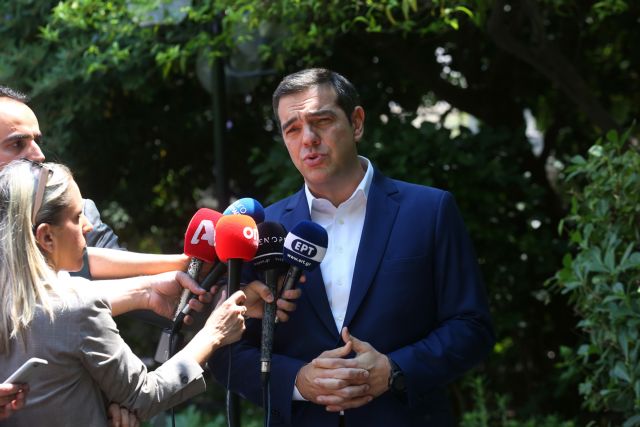 With the end of the pro-bailout and anti-bailout dilemma that SYRIZA used in 2015 to sweep to power, Prime Minister Alexis Tsipras today brandished the threat of a return to austerity if main opposition conservative leader Kyriakos Mitsotakis comes to power.

Moreover, he declared that New Democracy’s agenda has fueled fresh support in Brussels for the imposition of austerity measures on Greece and the rescinding of social benefits.

In brief, Tsipras is depicting ND and conservative forces in Brussels (he has made EPP Commission Presidency candidate Manfred Weber the poster boy for this) as dual villains, or partners in crime against the working class.

Conservative austerity versus SYRIZA social benefits and relief for the vulnerable is the ruling party’s new Manichaean political dilemma for voters.

However, it is so close to Tsipras’ failed stratagem of having voters choose between SYRIZA, representing “the many”, and New Democracy, representing “the few”, which is to say the dread capitalist elite, that analysts say there is little reason to believe that a slight verbal makeover will do the trick this time.

In an unusual move that came on the heels of yesterday’ alarm bells in a European Commission report that warned of a potential fiscal derailment due to pre-election benefits and handouts announced by Tsipras, which will cost an estimated five billion euros over two years, the PM made a nationally televised statement in the courtyard  of his Maximos Mansion offices.

“A week before the European Parliament election and with full cognizance of the risk involved I told the Greek people the whole truth, that their vote was a quasi-vote of confidence in [my] support and relief measures,” he said

“Today, everything I said was clearly confirmed…The result of the European election whetted the appetite of the political establishment in Greece and of extreme, conservative circles in Brussels which want to dispute our central political choices and hinder our plan. Today, they reached the point of raising the issue of firing public sector contract workers for the first time since 2014,” the PM declared.

One of the main platform differences between Tsipras and Mitsotakis is that the latter wants to shrink the state by hiring only one civil servant for every five who retire or withdraw, whereas the PM wants to hire one employee for each one that leaves.

Tsipras also appeared to want to draw the klieg lights of publicity away from a patronage scandal involving revelations that dozens of relatives and associates of SYRIZA MPs and cadres have been hired at the last minute as employees in Parliament.

Of 64 employees from ministries and local government who were to be transferred to more secure jobs in Parliament –  including Speaker Nikos Voutsis’ former wife (he said she worked there since 2007 and that it was simply an internal transfer) and the daughter of Vice-Speaker Tasia Christodoulopoulou (she said “certain acquaintances and connections were used”).

SYRIZA came to power on an anti-patronage platform and the mantra that it had the moral advantage of a party untainted by corruption and the wear and tear of governance.