Cyprus-Greece-Israel: The hydrocarbons unite them

‘This is really a very important and historic day and the discussions we will have with the Prime Minister of Israel, I believe will lay the foundation for an even stronger, cooperation with the countries of the Middle East,’ Anastasiades said. 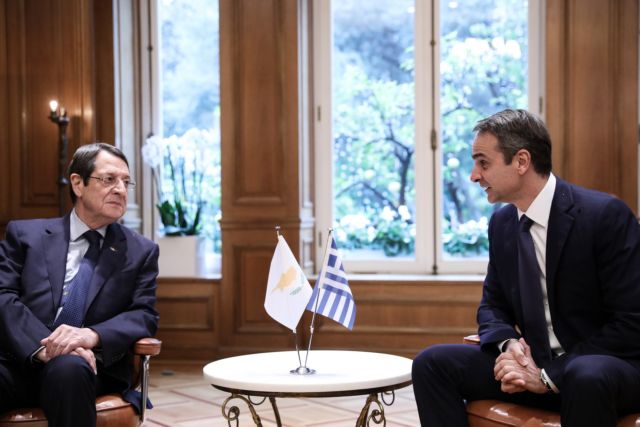 The three countries will sign a trilateral agreement on the construction of the EastMed gas pipeline.

Athens believes that the pipeline, if it goes forward, will act as a bulwark against Turkish designs in the eastern Mediterranean to deprive Cyprus and Greece of large parts of their Exclusive Economic Zones (EEZ) thus directly violating their sovereign rights.

Mitsotakis underlined the diachronically close relations between Athens and Nicosia and said this is a propitious day, as collaboration on EastMed marks a deepening of the strong trilatreral cooperation.

The Greek PM noted that EastMed is an important energy project and that the three countries have a broader cooperation beyond the energy sector.

That includes the area of defence, especially as regards protecting gas and oil deposits in the face of Turkish threats.

Mitsotakis described EastMed is a very important energy project, which is the result of a key trilateral collaboration that extends beyond the energy sector.
For his part, Anastasiades took care to stress, indirectly, that the pipeline is not a project directed against any other country.

He said that the initial intention of the trilateral cooperation has come to fruition.

He said it lays the foundations for what was Cyprus’ aim from the very beginning – using the three-way strategic partnership to establish cooperation rather than confrontation in the Middle East, particularly in the energy sector but also in other areas of common interest.

«This is really a very important and historic day and the discussions we will have together and afterwards with the Prime Minister of Israel, I believe will lay the foundation for the further, even stronger, cooperation with the countries of the Middle East».