Mitsotakis’ chief political strategist Takis Theodorikakos, who is to a large extent credited with ND’s electoral triumph, is said to be slated as the next interior minister. 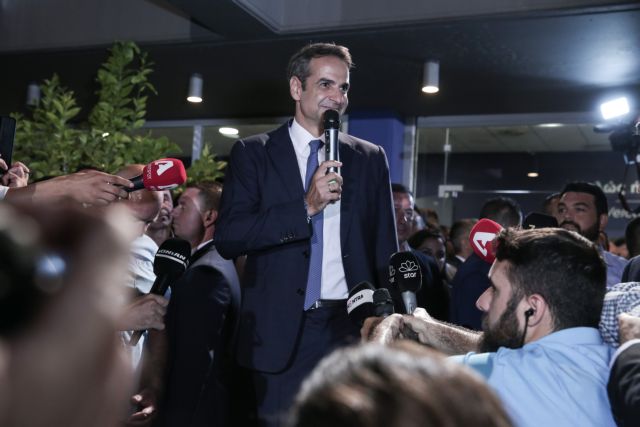 Following his landslide victory in the 7 July general election, Kyriakos Mitsotakis is poised to announce his cabinet today.

As the incoming Prime Minister had said prior to the election he had already picked his cabinet, though there may be last minute changes.

Until now it has been said that shadow finance minister Christos Staikouras will be tapped for the top cabinet post. It is said that Stelios Petsas is slated as alternate finance minister, but that has not been confirmed as yet.

Nikos Dendias and ND Vice-President Kostis Hatzidakis are both said to be candidates for the post of foreign minister.

Kyriakos Pierrakakis, a centre-left figure, is said to be slated for the post of digital policy minister.

Niki Kerameos is touted as the next education minister.

The crucial public order portfolio, on which ND has placed great emphasis, will by all accounts go to former Pasok public order minister Michalis Chrysohoidis, who is credited with rooting out the 17N terrorist group in 2002.

Shadow justice minister Nikos Panagiotopoulos is slated for the justice ministry, on which Mitsotakis has placed a particular emphasis, as he accused the outgoing SYRIZA government of using the judiciary to advance its political aism and harm its opponents.

ND Vice-President Kostis Hatzidakis, barring any surprise, will be the next Environment and Energy Minister, who will have to resolve the major problems besetting the Public Power Corporation.

Mitsotakis’ chief political strategist Takis Theodorikakos, who is to a large extent credited with ND’s electoral triumph, is said to be slated as the next interior minister. It is possible that he will also take the key administrative reform ministry.

It is as yet unclear who will be tapped to serve as the next defence minister, a particularly crucial post given Turkish challenges to Cyprus’ sovereignty in its Exclusive Economic Zone and to Greece’s sovereignty in the Aegean.

Though Vasilis Kikilias has been mentioned as a candidate it is reportedly possible that a former military figure will be tapped for the post.

The remaining ministries are expected to be filled as follows: