The new poll gives New Democracy 35.4 percent, SYRIZA 26.2 percent, the Movement for Change 8.7 percent (one percentage point above its result in the European election). 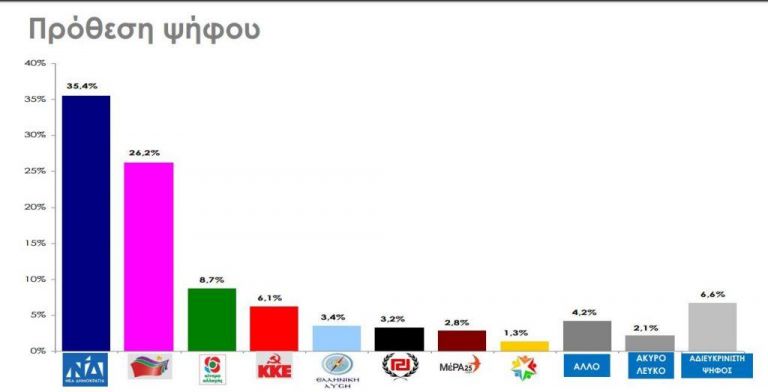 New Democracy leads ruling SYRIZA by 9.2 percentage points in a new poll conducted by the Rass polling company for in.gr between 24 and 27 June which suggests ND is on its way to clinching a parliamentary majority.

The poll gives ND approximately the same percentage as it garnered in the 26 May European Parliament election, while SYRIZA (which retains a solid 25-26 percent of the vote) and the centre-left Movement for Change, which appears certain to finish in third place with at least 8 percent of the vote, have gained some ground.

Former finance minister Yannis Varoufakis’ MeRa25 (Diem 25) party polled2.8 percent of the vote, which means that it cannot garner the 3 percent of the vote to enter parliament, although it is at the cusp given the statistical argin of error.

If there are only six parties that manage to enter parliament, then New Democracy will quite possibly be able to secure single-party rule.