The CEO proposed that the state directly pay for the discount by giving consumers coupons which they can use with the electricity provider of their choice. 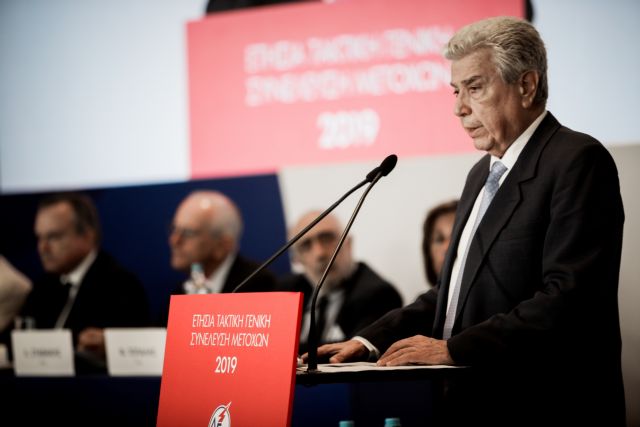 The Public Power Corporation’s (PPC) President and CEO Manolis Panagiotakis today told the embattled company’s Annual Shareholders’ Meeting today that the two options that lie ahead if the hugely indebted company is to stand on its feet are either to maintain the Greek state’s position as majority stakeholder with a radical restructuring of the framework of operation and the state’s role or to introduce a strategic partner.

Panagiotakis said that if the state is to maintain both its majority stake and management it must abandon the current tight embrace of the company and proceed with a radical overhaul of its operational model in line with the rules of good corporate governance.

He said that would require an immediate overhaul of the institutional framework by the government elected in the 7 July general election and that it would entail lifting obstacles pertaining to hiring, wages, procurement, and the awarding of contracts.

The second option presented is to find a strategic investor with the approval by shareholders of the terms of decision-making and the appointment of management.

Panagiotakis described as “nightmarish and catastrophic” any plan under which there would first be a sell-off of the company’s assets (packages of lignite and hydroelectric power units) as a means to resolve the company’s economic impasse, followed by the entry of a strategic investor.

“How can one find a strategic investor in a company that will have become an empty shell?’ he asked.

Panagiotakis said that a sell-off of valuable assets is not the way to clean up the company and that only a refinancing of loans can reduce financing flows and increase profitability by 80 percent.

Panagiotakis stressed that PPC must be free to operate exclusively with market criteria without shouldering the state’s commitments, such as discounts for low income households known as the “social price schedule”.

In that regard he proposed that the state directly pay for the discount by giving consumers coupons which they can use with the electricity provider of their choice.

“Our fellow-citizens who are in need of the social price schedule should be subsidised by the state with coupons and choose a provider. Now they all go to PPC,” he said.

‘Losses due to external factors’

Panagiotakis maintained that PPC’s losses are attributable to external factors – such as the hike in the CO2 price and a drop in sales – which could have been addressed if the company’s operation did not impact on the entire country and if there were no obstacles to the adjustment of electricity pricing.

The company’s CEO said that structural changes are not enough if just labour cost is reduced due to the skyrocketing cost of energy auctions (NOME) and of pollution rights that exceed cost.

“Targeted structural changes are necessary and it takes time for them to produce results,” he said.

Regarding McKinsey’s restructuring plan PPC’s management said that in certain areas targets have been exceeded.

Panagiotakis said that the collection of delinquent debt has exceeded the 865mn euro target and is projected to reach 950mn euros in 2020.

The target of reducing personnel by 4,414 employees will be exceeded by 2022, he said.

As regards investment in electricity distribution and in renewable energy sources, management believes that lost ground can be covered by strategic planning.

“PPC is neither collapsing nor at the edge of a cliff,” the company’s CEO declared, underlining that it can function as a vehicle for economic growth as long as it is free to operate with business criteria.

Panagiotakis also announced a collaboration with the Hellenic Electricity Distribution Network Operator (DEDDIE) to develop subsidiaries in the areas of education and IT that will provide services to third parties and exploit the distribution network with a view to major investments in 5G telecoms networks.

According to its CEO, despite its difficulties PPC remains the country’s largest private investor (746.7mn euros in 2018) and bolsters Greek industry and its competitiveness.

Panagiotakis declared that the freeing up of the energy market should be re-planned from scratch.

“Even providers that have private electric power plants prefer to buy electricity from PPC instead of from their own companies,” he underlined, noting that the quantity of energy provided by PPC through NOME auctions exceeds the entire lignite and hydroelectric production.