‘It would be well in the future for both sides to agree to implementation of these actions,” the Greek defence minister underlined, noting that he cannot commit the next government to anything. 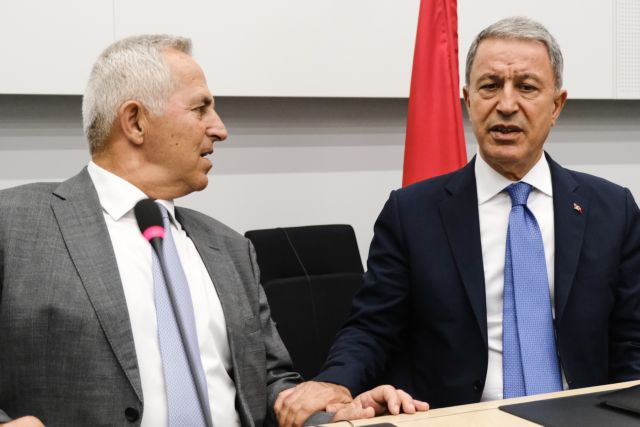 With Ankara ratcheting up tensions in the Eastern Mediterranean and the Aegean and Turkish leaders and opposition figures (such as ultra-nationalist MHP leader Devlet Bahceli) fanning the flames with nationalist rhetoric, Defence Minister Evangelos Apostolakis today announced that there has been a Greek-Turkish agreement in military-to-military talks on a series of confidence-building measures (CBMs) to be implemented in 2019-2020 by the next government.

Apostolakis said that the actions agreed to are in the context of existing CBMs, but he offered no details.

“It would be well in the future for both sides to agree to implementation of these actions,” he underlined, noting that he cannot commit the next government to anything.

Apostolakis defended the decision to dialogue with Turkey despite – or especially because of – heightened tensions even as he declared Greece’s resolve in defending its sovereign rights.

“I expressed our objections to their [Turkey’s] moves in the Aegean and Cyprus’ [EEZ].We seek peace and security but under no circumstances will we back off from defending our sovereign rights. We wish to avoid tensions,” Apostolakis said after a meeting with his Turkish counterpart Hulusi Akar on the sidelines of a Nato defence ministers’ meeting in Brussels.

Both Apostolakis and Akar served as their country’s Chairman of Joint Chiefs of Staff immediately before being appointed as defence minister and in that capacity they have had extensive contacts, have handled crisis (such as the capture of two Greek army officers at the Evros border region) and are quite familiar with each other’s thinking.

In an on-camera  moment when he was greeting his Nato counterparts the Greek defence minister kissed his Turkish counterpart on both cheeks.

Talks in shadow of Zachariadis’ resignation

The meeting came less than a month after the resignation of Lieutenant-General Nikolaos Zachariadis, a former military representative of Greece to Nato who was involved in the military-to-military talks, who objected to continuing discussions with the Turkish side on CBMs and opposed any move to comply with the Turkish side’s request to negotiate the extent of Greece’s airspace and territorial waters in the Aegean.

Zacahariadis’ resignation was interpreted by some as a reaction to his inferred openness of Apostolakis to more expanded talks that would move beyond just CBMs.

Apostolakis today defended the government’s decisiveness in continuing talks with Ankara as the best deterrent.

“That after all is the purpose of the meetings between the two [military] technical groups regarding CBM actions. In my view, the fuss over these discussions was unjustified. It is always better to talk and maintain open channels of communication.”

After Prime Minister Alexis Tsipras’ meeting with Turkish President Tayyip Erdogan in Ankara in February, the two leaders announced plans to hold an expanded, multi-level dialogue, and Tsipras had cited the need to keep an open line of communication.

They also announced that there would be a military-to-military dialogue and contacts in an effort to defuse tensions in the Aegean and safeguard against potential accidents.

Erdogan went as far as to say there would be agreements reached, but no such have become public so far.

Apostolakis’ remarks today were viewed by analysts as a move to keep open lines of communication in a period that will be marked by a transition of power after Greece’s 7 July general elections, which polls indicate New Democracy leader Kyriakos Mitsotakis will win by a large margin.

New Democracy has demanded that the PM and ministers cease any action that will bind the next government on Greek-Turkish relations or other national issues.