Lawsuits against Tsipras, Papangelopoulos to be reviewed after election

On the judicial front, outgoing Supreme Court Prosecutor Xeni Dimitriou reviewed the three lawsuits and has ordered a limited probe of the charges of the three plaintiffs-politicians. 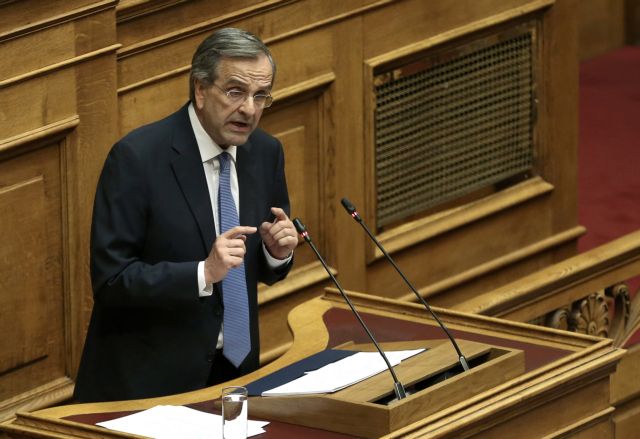 The Parliament that will be elected in the 7 July general elections will have to review from scratch a lawsuit against Prime Minister Alexis Tsipras and Alternate Justice Minister Dimitris Papangelopoulos filed in the Supreme Court by former PM Antonis Samaras accusing them of having organised a conspiracy to implicate him and other top politicians in the Novartis kickbacks scandal, as well as similar lawsuits filed by Greece’s European Commissioner Dimitris Avramopoulos and by former Pasok leader and deputy PM in the Samaras government Evangelos Venizelos.

The files regarding the lawsuits have already been sent to Parliament as that is mandatory under the Constitution if the name of a politician pops up in a case, regardles of whether there is evidence against him or her.

The legislature must then decide whether to lift the MP’s parliamentary immunity so he or she can be investigated.

On the judicial front, outgoing Supreme Court Prosecutor Xeni Dimitriou reviewed the three lawsuits and has ordered a limited probe of the charges of the three plaintiffs-politicians – only those allegations pertaining to the corruption prosecutor who handled the case.

Dimitriou rejected Deputy Supreme Court Prosecutor Ioannis Angelis’ request for a judicial investigation of the identity of the man described by him and ex-corruption prosecutor Eleni Raikou as Rasputin. She also rejected Angelis’ request that Samaras, Avramopoulos, and Venizelos be summoned to testify about their allegations.

Angelis, who supervised the corruption prosecutors’ investigating the Novartis case, had shelved the lawsuits.
It was he that ordered that the lawsuits he himself had shelved be re-investigated because new evidence had emerged, and that led to Dimitriou reviewing the politicians’ lawsuits.

Angelis reportedly submitted 10 documents which he describes as new evidence but Dimitriou dismissed them, noting that those document were already in his possession in December, 2018.

It remains unclear what the evidence might be, but Samaras in a 21 June interview with the newspaper Parapolitika said that Papangelopoulos is the minister that ex-corruption prosecutor Eleni Raikou (who resigned) and Angelis described by the moniker “Rasputin”.

In an open letter he sent to the press Angelis claimed that “Rasputin” was a minister who ordered prosecutors to file charge without sufficient evidence.