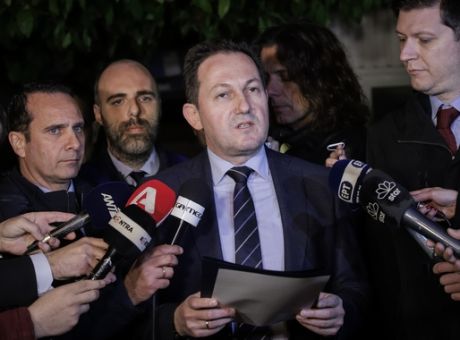 The current multivarious challenges to everything in Greece require vigilance, coordinated and organised action, and discipline with a common understanding.

Greece at this juncture is confronted with a number of different threats.

It faces issues of national security, public health, and social peace and cohesion.

These threats and dangers are such that they test both our ability to act collectively and social institutions.

This is a long-term challenge for state structures and for the discipline and adaptability of the citizenry in the face of changing and largely extraordinary conditions.

Greece is already exposed to the threat of the coronavirus. The first cases are being handled by the competent healthcare authorities.

From the very beginning the state has implemented international medical guidelines, has instructed citizens to assiduously follow the rules of personal hygiene and care, and has taken preventive measures that can retard the spread of the virus so as to facilitate the handling of cases.

As a preventive measure – with a heavy economic and social cost – authorities banned carnivals and other major events.

In line with standard procedures in such cases, as the phenomenon develops and the virus spreads stricter measures that will limit the movement and activity of people may become  necessary.

In that sense much will depend on the stance and behaviour of citizens.

As much as one may dispute the necessity of certain preventive measures everyone has a duty to fall in line and contribute to their enforcement.

Ignoring or scoffing at such measures or refusing to enforce them demonstrates a lack of understanding and of responsibility to other individuals and the social whole.

In managing the migration and refugee problem, though different in nature and scope, everyone has a duty to adopt a similar stance.
There is no room for autonomous actions or personal strategies.

The nation’s territory is unified and the crisis is not limited to the Northern Aegean islands as it impacts on the entire country.

It requires a unified stance and contribution, mutual understanding and agreement on the parameters of the problem, and an equitable distribution of the burden nationwide.

Choices and postures such as those of the prefect of the Northern Aegean do not honour his office and do not befit the institution of local government.

Moreover, no government can take social peace for granted as it is won and built through perpetual dialogue and the contact of the government with local officials and citizens.

That demonstrates the sense of respect, credibility, and trust conveyed to the people by successive governments and their representatives.

The current multivarious challenges to everything do not permit extremities or a priori negativism. On the contrary, they require vigilance, coordinated and organised action, and discipline with a common understanding.

These challenges are of critical national dimensions. They affect everyone and no one can remain untouched by them.

It is imperative at this time that everyone puts aside the “I” in favour of “We” as a national whole with a unified consciousness.
As the poet wrote, “If we get through this winter we shall survive the next decade.”