‘Greece cannot and should not on its own shoulder the burden of what is essentially an EU-wide problem,’ Mitsotakis said. 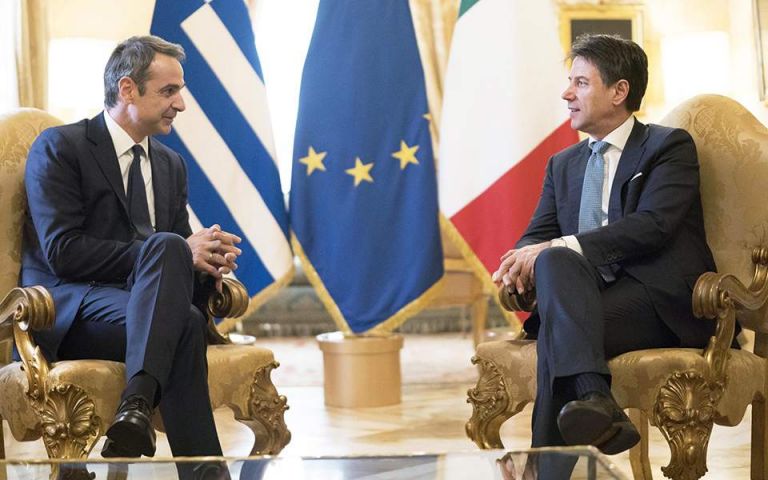 Prime Minister Kyriakos Mitsotakis stressed the urgent need for all EU states to share the burden of huge and growing migration-refugee flows, the result of an EU policy that forces the country of entry to register and keep migrants.

Mitsotakis and Conte discussed international and regional issues, including Turkey’s illegal gas drilling in Cyprus’ EEZ, in which the Italian energy giant ENI has a stake. Turkey has blocked with its ships ENI from drilling with its SAIPEM drilling ship. The two leaders agreed on the need for EU-wide cooperation on the migration and refugee crisis.

They also criticised Turkey’s use of all the migrants who come to Greece from its shores as a tool to advance its geopolitical needs.

At a news conference Mitsotakis said, «Greece is a country of entry and has been tried by huge migrant flows that are many times more than its capability to take them in.»

Mitsotakis called for the EU-Turkey statement that lays out Ankara’s ande the EU’s obligations to be enforced and said EU solidarity must been taken seriously.

«Greece cannot and should not on its own shoulder the burden of what is essentially an EU-wide problem. One must intensify initiatives on the refugee issue that must be better coordinated EU-wide and that must be a priority for all of us,» Mitsotakis said.

For his part, Italian PM Giuseppe Conte agreed that the migration and refugee issue requires EU management and that the return of migrants and burden-sharing is also a high priority for the Italian government.

Conte said he is concerned about problems regarding the sea borders in Southern Europe and he expects the new, incoming Commission to grapple with the issue in the first phase of its tenure.