Referee scandals against Olympiacos continue in the Greek super league 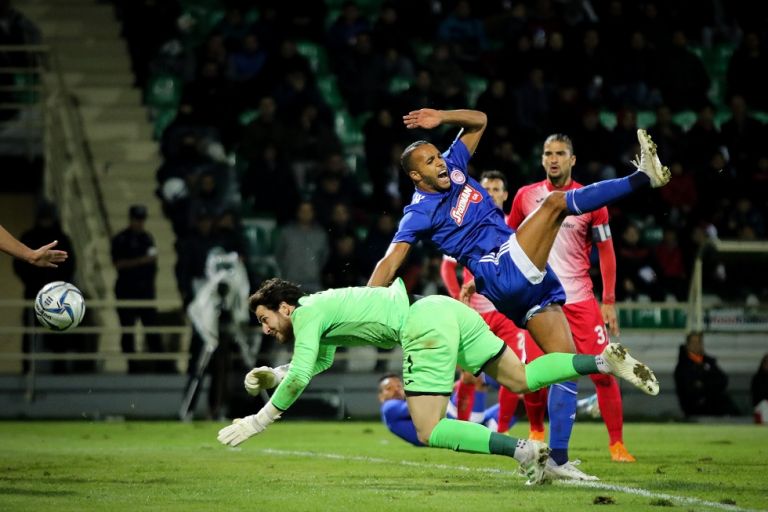 Only seconds apart, a more than obvious foul at the limits of the penalty area of Xanthi FC, the victim being Mady Camara (60’).

A series of moments that all ended in the same way: with Olympiacos demanding a fair judgment.

Sosa’s handling the ball outside the penalty area after a pass by Omar Elabdellaoui.

Moulin’s hand on the ball exactly on the goal line after Kovacevic’s heading which almost proved ‘suicidal’ for the team.

And here is the inevitable question: Was VAR functioning tonight?

Was there any help by technology in the Xanthi-Olympiacos match that had an important effect on the teams’ position within the League? Or something else was happening? Because last week at the Olympiacos – AEK match a goal from Olympiacos was annulled, returning the game ‘back to the half-way line’.

Tonight, was there any need for technology, even for obvious penalty cases?

This was the question posed by the Olympiacos’ coach: ‘I cannot understand why VAR exists…’, Pedro Martins asked. However, perhaps he should be more cautious with what he says. Because is highly probable that he will end up with a summons to appear in front of the disciplinary bodies. Like most persons in his team.

For example, Costas Karapapas. Take for granted that he will again be asked to testify. ‘Do you know who is the owner of Xanthi FC? Who is the owner of Volos? You do not know? Because everyone in Greece says and writes that they have the same owner. Everyone in Greece says that these two football clubs have been bought by PAOK. Why don’t you say things by name? They should come and tell us who is putting money into Xanthi and who is putting money into Volos. What was the sum paid to acquire shares? To which company they belong?’ Those were the questions posed by the vice-president of Olympiacos. And this was a statement that reached the media. One can understand what will follow.

However this phrase ‘everyone in Greece says and writes that they have the same owner’ will probably not bother anyone. In the same manner, that nobody bother to deal with the fact that the president of Appolo Smyrna stated on May that ‘Panopoulos is no longer in Xanthi, it has been bought by Savvidis. But what you do not know is that he also bought Panaitolikos. For seven million. Xanthi was bought last year, Panaitolikos twenty days ago. Kostoulas was bored and tired’. Similarly no one bothered to deal with the fact that last week during the Volos – PAOK match, 6 players of the home team watched the game as simple fans, because they were ‘on loan’ from PAOK. Six out of twenty four, that is 25% of the roaster.

Giorgos Georgiou resigned. PAOK threatened to sue, but the lawsuit never came. But no one asked about the substance of the matter.

In the same manner, no one asked why the result on the Volos-PAOK was treated by ‘betting companies’ as… ‘inevitable’: the winning rate was 1,18 for a PAOK win on the day of the match.

In the same manner that no one asks why Olympiacos had such a treatment by referees.

So Costas Carapapas awaits his summons. In the meantime Carapapas added: ‘Today VAR got lost. Curiously enough it was nowhere. There was a moment with El Arabi but we saw no VAR deal with it, whereas in other matches in order for one of our goals to count, the watch the VAR five or six times.

The essence of the matter is simply. It is high time that we spoke the truth and avoid the imnnuendo. The truth is that are watching a kind of football that is completely discredited. The people of the Greek Football Federation (EPO) and in particular Mr Grammenos, who according to PAOK’s president is an employee, have brought this person, Pereira and you can ask us, who have a large Portuguese contingent, because we know very well who Pereira is and what he had done in Portugal as a referee and what interests he was serving there.

The government and the Ministry of Sports and the Professional Sports Commission have to seriously deal with this issue. In particular with this issue that everyone in Greece knows about yet no one talks about.

From now on we will tell things by their names, and we do not care about lawsuits, they have ridiculed football. You see that only Olympiacos’ people are being investigated and charged. Why? Because we tell the truth, we tell every Sunday what is happening. And they have to persecute us. No one else is being persecuted in Greek football.
Unfortunately the board of EPO with Mr. Grammenos and Mr. Pereira, all these people act under the aegis of UEFA that has to understand what is happening in Greek football. Now we have a federation that is a disgrace and the new government must put an end to what is happening, in order to see what we can do.

You have to tell it so that it can be heard. Greek football will be disgraced, unless there is drastic change… As for us every Wednesday we go to a celebration of football, we play in the Champions League, we face Bayern and Tottenham, but we cannot remain silent.

I am telling you this and we will be soon going to court again. But so be it. This is the truth. The Commission of Professional Sports and the Ministry of Sports should tell us who owns these groups. Where are the prosecutors? Media in Thessaloniki insist that PAOK owns Volos. Where are the prosecutors? There was a time when we just happened to pass from Hilton Hotel and the prosecuted us, where are they now? Have they left? Have they resigned? They do not exist now? And we will go through this every Sunday? Olympiakos FC will proceed will proceed with lawsuits, because we think that great damage has occurred. We will not let it pass. But you should start telling things by their names. Lawsuits do not frighten us. We are Olympiacos. The biggest FC in Greece, we represent half of Greece. We are afraid of no one, we will tell things by their names. They should start by telling us who owns those two FCs.”

A few days ago, in what might be considered a world first, the disciplinary organs called Savvas Theodoridis, who has no official position in the club. His only is the honorary president. Next time they might call the fans watching the game at the stadium. Or those who wonder over what they see on their TV sets. Until spring arrives, there are only a few months.

ΥΓ . In the middle of the week Xanthi issued a press release about the referees in a previous march. No one summoned it. Giorgos Savvidis – a member of the board of PAOK FC, but also the son of the owner Ivan Savvidis – regularly write incendiary messae on social media, but no one is bothered. Who knows? Perhaps it just happenned.