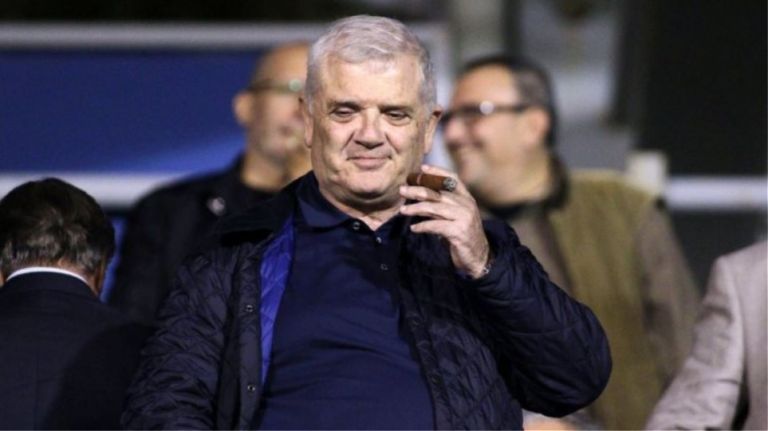 One is today confronted with an unpunished foray of Dimitris Melissanidis on a football field, indifferent policemen and absentee ministers who do not honour their oath.

Serious issues arise regarding the stance of police authorities and about the responsibilities of co-competent services as regards the skirmishes between AEK-PAOK at the match on Sunday, 29, September.

It appears that at certain football fields legality is either suspended or applied selectively.

There is no other way to describe the image given by the Swiss coach in the AEK-PAOK match of Sunday, 29 September in the match’s record.

“After half-time and as I was going to the locker-room of the referees he showed me the yellow card of the representative of the home team AEK FC Vasileios Dimitriadis because he plaintively yelled, “Give us a foul too, what are you doing?”

As I approached our locker rooms Messrs.Dimitrios Melissanidis and Vasileios Dimitriadis were waiting for me outside the locker rooms and  began complaining loudly, “Give us a foul too. You give them all too PAOK.”

During the incident there were two policemen who were sitting behind these two gentlemen and not between us in order to protect us.

Then we entered the locker rooms and the two aforementioned gentlemen followed us and continued to declare their complaints.

None of the policemen attempted to impede them from entering. Once I entered the locker room I sat on the couch and the two gentlemen continued to complain intensely.

During the incident the fourth referee tried for about one minute to intercede and protect me. No policeman tried to intervene to protect us.

One should not bypass the football game sheet as yet another example of “momentary tension.”

It is not as if someone stood up from the bench and started shouting intensely.

Greek law mandates that the protection of referees from any intervention or threat must be absolute.

Here on the contrary we saw an unacceptable stance by police who allowed entry into the referees’ locker rooms of people who had no such right.

On this point football regulations are clear: “There is a prohibition of entry of any official and football player and of any member of teams’ management and of any person outside of football, as well as of any DEAV (General Secretariat for Athletics Permanent Committee on Combating Violence) observer and of any person not authorised by football authorities with specific authority.

Police are stationed outside of referees’ locker rooms in order to block the entry of unauthorised persons.

When there were complaints against referees police did not intervene to combat violations of athletics law.

Is Minister Chrysohoidis aware of how police behaved in this case?

Does he believe that they rose to the occasion?

Is this how deputy athletics minister Avgenakis view lawlessness in stadiums?

Do ministers believe that there is asylum for football bigwigs and managers when athletics laws are violated?

Ministers and Mr Lakovic must tell us how such incidents must be punished on the…Wednesdays of European matches.

Does any of this happen in any other European country?

To put it simply, Mr. Melissanidis has often exhibited how he views the role of football management.

Those in the stands say that in the same match say he addressed Petr Fousek the representative of FIFA/UEFA in Greece and Juan Antonio Marin, a member of the Central Committee of referees of the Greek Football Federation, appointed by international federations who served as an observer of the referees in the said match.

In brief, Marin evaluated the performance of those who did not “give AEK any foul” according to Melissanidis and was cursed by the leader of AEK.

Naturally, the dozens of policemen on the scene did nothing.

One must stop turning a blind eye

The issue is simple and if the competent ministers and  FIFA/UEFA officials want to turn a blind eye, we shall not follow them.

Chrisohoidis, Economou, andf Avgenakis along with Lakovic (we will not ask Grammenos but rather Ivan directly), when 20 days ago they announced sweeping changes with the creation of a special steering committee to combat violence and ensure the proper conduct of matches (due to incidents of violence and threats against referees), Chrisohoidis said that Sunday Champions League games should be like European Wednesday matches.

We must now ask them how this will be accomplished.

When police forces are eyewitnesses to the cursing and aggressive behavior of football bigwigs against referees and do not intervene to protect referees (A Swiss referee has lodged such charges) what can a special committee whose members are not eyewitnesses do?

They will assign the probe to policemen such as those who remained inert at OAKA, and the Toumba policemen who last year taunted Olympiakos players and this year Aris players.

In the interim, officials can continue to spew pious wishes until someone enters the playing field with a gun or until we mourn victims.

Then everyone will purport to be taken by surprise and will condemn the violence.

Today however everyone is mute and the judiciary once again declared innocent Yannis Papadopoulos and punished Melissanidis with a mere 30-day ban on his presence in stadiums and a mere 10,000 euro fine.

One must not believe that all of this is an internal affair.

After the international embarrassment of Greek football with the widely shown photo of Ivan Savvidis entering the playing field with a gun in a holster, now we have the case of the “tiger” Dimitris Melissanidis.

Swiss referee Daniel Wermelinger told the Swiss media that, “It is true that the president of AEK entered the room of Stephan Klossner and yelled in two or three phases of the game. But he was speaking only in Greek so the two of them could not communicate. It is odd to enter the referees’ locker room at half time. Another country and other customs.”

The cleanup of Greek football is selective. Once someone faced charges for a handshake in a locker room and now cursing is simply bypassed.”

That is the supposed cleanup of Melissanidis and Savvidis!

Obviously certain major players in football believe they have asylum.

Sources say that US Commerce Secretary Wilbur Ross requested assistance from the Greek PM on the  Aegean Marine Petroleum Network scandal. US Ambassador to Athens Geoffrey Pyatt spoke to the Greek Justice Minister regarding delays in handling the issue.

Arbiters will not likely vindicate Melissanidis.

Melissanidis has lawsuits against him that implicate him in a $300mn Wall Street scandal  in the Aegean affair.

Now competent ministers must answer if they will act against impunity in Greek football or whether they will turn a blind eye and continue to offer claptrap on zero tolerance.Greece abroad.