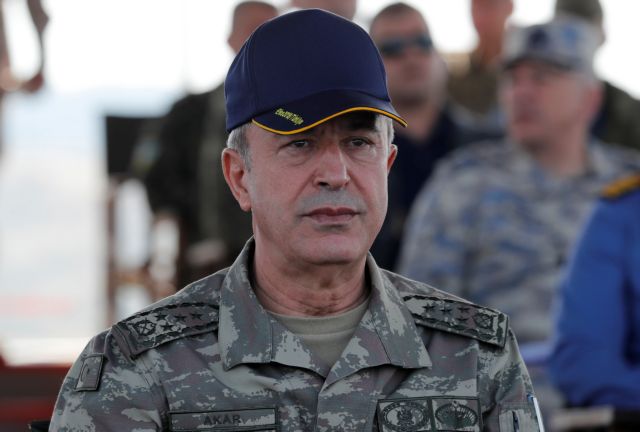 Turkish Defence Minister Hulusi Akar today threatened the Republic of Cyprus with a heavy price if it does not agree to the co-administration with Ankara of the island’s huge hydrocarbons deposits.

Ankara has defied limited EU sanctions and repeated US warnings not to drill for gas and oil in Cyprus’ Exclusive Economic Zone, in parts of which US and European energy companies have been granted permits from Nicosia.

Akar essentially a priori torpedoed talks tomorrow between Cyprus’ President Nicos Anastasiades and Turkish-Cypriot leader Mustafa Ankinci who is calling for a joint committee to manage the island’s resources on an equal basis.

Akar was speaking at a nationalistic commemoration of the 1964 bombing of Tylliria by the Turkish Air Force which also used napalm against the civilian population in an area where it sought to establish a breakaway Turkish-Cypriot enclave (Kokkina) as a first step to the partition of the island.

Kokkina was the depot for illegal weapons and troops sent by Turkey to advance its separatist aims.

It was only the ultimatum of US President Lyndon Johnson that averted a Turkish military landing on the island in June, 1964.

The New York Times reported extensively on the crisis.

“Officials here declined to confirm reports that a Turkish invasion fleet had been formed. But they noted that the Turkish Government some time ago announced plans for large amphibious maneuvers and that troops and vessels gathered near the port of Iskenderun. This is the nearest large port to Cyprus on the Turkish coast.

“The Turkish military activity and a military alert that it touched off in Greece and Cyprus prompted the United States to move quickly during the last 24 hours to try to avoid a collision between Turkey and Greece over the Cyprus question.

“Qualified sources indicated that the President had sent a message to Premier [Ismet] Inonu last night through the United States Ambassador in Ankara, Raymond A, Hare, with the invitation to visit Washington,” the New York Times reported on 6 June, 1964.

It was perhaps Ankara’s most humiliating moment ever as regards the Cyprus problem, and it did not forget.

“Let them not test our power because there will be a heavy price to pay,” Akar declared today in Turkish-occupied Cyprus.

“We hope that all relevant parties, especially the Greek Cypriots, understand our conciliatory and sincere approach and respond in kind,» Akar said, adding that Turkey is the most powerful guarantor of peace and stability in the region.

Turkey speciously interpreted the 1960 Treaty of Guarantee, one of three that established the Republic of Cyprus and ended British colonial rule, as a pretext for occupying the island in July and August, 1974.

The UK, which to this day retains two hugely important geostrategic bases on the island, did nothing to stop Ankara.

Today, it expresses at least tacit consent for Turkey’s positions on Cyprus’ EEZ.

Akar expressed optimism that Ankara can reach an understanding with Greece’s new Mitsotakis government but he did not clarify on what basis he thinks that will occur beyond a vague notion of “mutual trust”.