The move comes a year-and-a-half after the collapse of Cyprus settlement talks at Crans Montana, with a new push to jump-start the talks underway. 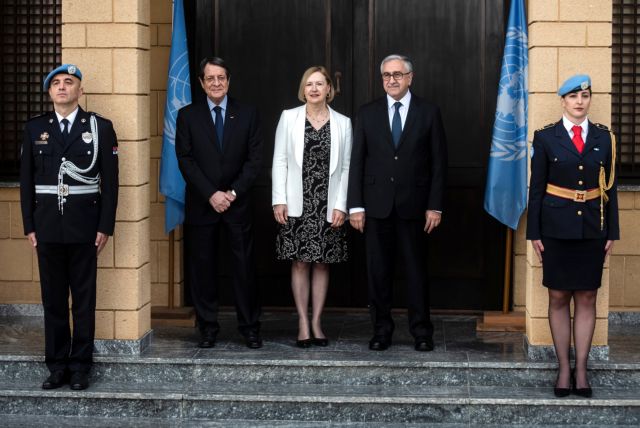 The President of Cyprus, Nikos Anastasiades, and Turkish-Cypriot leader Mustafa Akinci agreed at a meeting today to implement confidence-building measures (CBMs) mainly in the sectors of telephony and electricity grids.

The move comes a year-and-a-half after the collapse of Cyprus settlement talks at Crans Montana, Switzerland with a new push to jump-start the talks underway.

It also comes amidst bellicose moves by Ankara to impede and undermine the hydrocarbons programme of the Republic of Cyprus and to conduct illegal drilling in Cyprus’ Exclusive which for many renders the need for a settlement all the more pressing.

The talks were conducted under the auspices of UN Cyprus envoy Elizabeth Spehar.

A lengthy statement issued by the spokesperson of the United Nations in Cyprus today offered details about the CBMs and left open the prospect of agreeing to more such measures.

The full text of the statement is as follows:


“Today, the Turkish Cypriot leader, Mr. Mustafa Akıncı, and the Greek Cypriot leader, Mr. Nicos Anastasiades, met at the Chief of Mission’s residence in the United Nations Protected Area under the auspices of Special Representative/Deputy Special Adviser to the Secretary-General on Cyprus, Ms. Elizabeth Spehar.

They had a constructive exchange of views in a cordial atmosphere. Mr. Anastasiades presented his ideas on decentralization and the two leaders discussed in depth the basic principles.

Regarding confidence-building measures, the leaders committed to intensifying the work of the Technical Committees with the objective of improving the daily lives of all Cypriots.

The two leaders decided to implement the confidence-building measure regarding mobile phone interoperability through separate agreements of the operators on both sides with a hub based in Europe, in order to facilitate greater interaction between the two communities.

They announced that the inter-connectivity of the two electricity grids, as agreed in 2015, has now been achieved. In this regard, they decided to make the temporary electricity supply arrangement permanent and without restriction. They acknowledged that the transfer of electricity will continue on an as-needed basis.

The leaders agreed to the clearance of nine suspected hazardous areas on both sides of the island, with a view to working towards a mine-free Cyprus.

Mr. Anastasiades similarly conveyed to Mr. Akıncı the Greek Cypriot side’s decision to hand over visual and audio recordings of Turkish Cypriot artists that exist in the archives of the CyBC, belonging to the pre-1963 period.

The two leaders have tasked the Technical Committee on Culture to realize the exchange of these invaluable works of art, belonging to the respective communities.