Government backs down on plan on clergy’s salaries

In a singular display of legerdemain, the clergy (estimated at about 10,000 priests) will still be paid by the Unified Payments Authority just like all civil servants, but they will not be counted as civil servants. 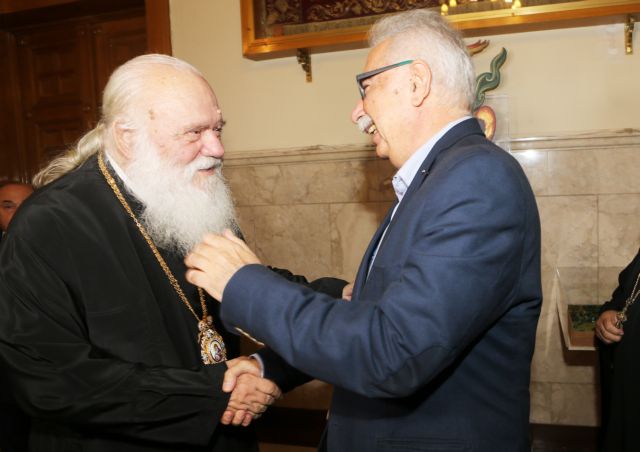 The government has released its revised plan on the implementation on the church-state agreement agreed to by PM Alexis Tsipras and Archbishop Ieronymos of Athens and All Greece, following a meeting between Education, Research, and Religious Affairs Minister Kostas Gavroglu and the church’s committee on dialogue with the state.

Essentially, the government has backed down on taking away the status of civil servants from the clergy.

Gavroglu said that there will be three parts in the government’s draft legislation on church-state relations. The first part will ratify the final version (reached through dialogue) of the church-state pact. The second two parts will include provisions regarding the salaries of clergy and lay employees of the Church and regarding a Fund for the Utilisation of Church Assets.

The plan states that the employment regime and tenure of clergy, religious functionaries, and employees will remain the same as employees of a public law legal entity. The wages will remain at the same levels as now, and will be adjusted upward along with those of civil servants when there are salary increases.

Effectively, if not in name, the clergy will retain their civil servant status and privileges and protections.

In a singular display of legerdemain, the clergy (estimated at about 10,000 priests) will still be paid by the Unified Payments Authority just like all civil servants, but they will not be counted as civil servants.

This will allow the government to hire 10,000 new civil servants without that being seen by creditors and the institutions monitoring the Greek economy as an increase in the number of civil servants.

However, the state will not pay priests directly as it does now, but will deposit the money in a new Church of Greece Salaries Fund annually. If a priest is not paid, he will be able to take legal action against the Church but not the state.

In the context of the agreement, a Registry of Clergy and Lay Employees of the Church of Greece will be drafted and all will retain their current rights.

What is considered important is that the new agreement will not be passed as a simple law in Parliament but rather will be ratified, which means that the state cannot unilaterally change the terms in the future by passing a simple law, as it can now.