In a thinly veiled barb against Greece, Cavusoglu said that, ‘Turkey would never give permission to people that are considered by you to be traitors to remain in Turkey, nor provide hospitality to aspiring terrorists and coup-plotters.’ 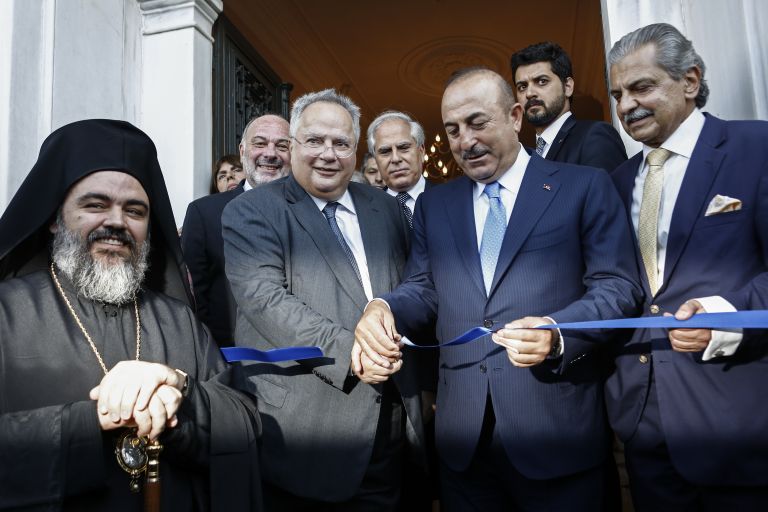 Cavusoglu, however seized the opportunity to raise the issue of the eight Turkish military officers who sought asylum in Greece after the failed coup of July, 2016, in which they insist they did not participate. The Greek Supreme Court ruled that they could not be extradited because they could not be guaranteed a fair trial in Turkey. Two have been granted asylum, and the other six are expecting the same due to the precedent.

In an apparent show of power, a pair of Turkish warplane flew at a low altitude over Izmir, as Turkey’s Hurriyet Daily News.

“The meeting between the foreign ministers of Turkey and Greece was briefly interrupted on Sept. 4 when low flying Turkish acrobatic jets surprised the Greek minister, who was calmed down by his Turkish counterpart. During the press conference, noise from the low flying Solo Türk acrobatic jets filled the room at one moment. When the Greek minister anxiously pointed to the sky, Çavuşoğlu calmed him down with a smile, telling him there was nothing to worry about. Solo Türk jets were in a test flight ahead of their upcoming show for the 96th anniversary of İzmir’s liberation from the Greek invasion in the aftermath of World War I,” the daily reported.

Greek troops were sent to the Zone of Izmir in 1919 by the Allied Powers after WWI, amidst their discussions of a partition of the Ottoman Empire.

The two foreign ministers conducted a no-holds-barred discussion on the full array of bilateral issues, including the Cyprus problem, ahead of a new push by the UN later this month to jump start reunification talks.

In an otherwise cordial encounter, Cavusoglu dropped barbs about Greece allegedly being a safe haven for coup plotters.

In a thinly veiled barb against Greece, Cavusoglu said that, “Turkey would never give permission to people that are considered by you to be traitors to remain in Turkey, nor provide hospitality to aspiring terrorists and coup-plotters.»

Kotzias picked up the gauntlet.

“»Greece does not harbour terrorists. What we have always had in our country are the proper processes of law and international law. It is this that forms the basis of our relations, friendship and our common course toward Europe, I think,» he said, referring to irrevocable decisions by the Greek Supreme Court and the Council of State, regarding the eight Turkish asylum seekers,” Kotzias replied.

He also expressed staunch support for the lifting of the visa requirement for Turkish citizens visiting the EU.

«I cannot imagine the future of the EU without a special connection with Turkey. But we must not wait for that day. The requirement for a visa for Turkish citizens must be abolished much sooner so that our consulate has one less job to do. Turkey has a right to implement the agreements with the EU. Everything that is agreed must be implemented by both sides,» he said.