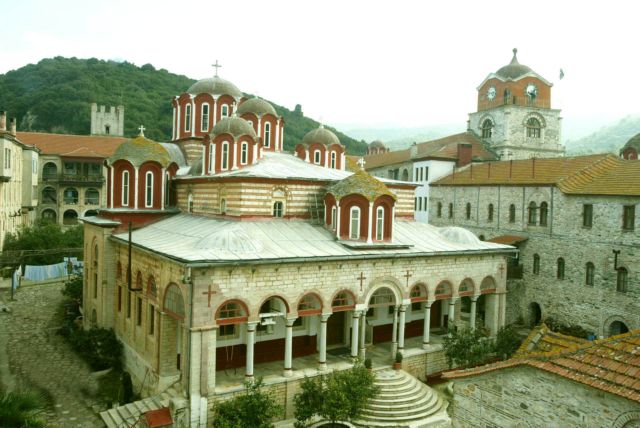 The head of the Thessaloniki Prosecutor’s Office has ordered a probe into charges by Abbott Vartholomeos of Esphigmenou Monastery on Mount Athos (photo) that unvaccinated monks are not only refusing to get the jab but are also urging the faithful not to do so.

The head of the Thessaloniki Prosecutor’s Office has ordered a probe into charges by Abbott Vartholomeos of Esphigmenou Monastery on Mount Athos (photo) that unvaccinated monks are not only refusing to get the jab but are also urging the faithful not to do so.

The prosecutor will investigate whether monks have been disseminating false information on COVID-19 and is expected to ask the abbott to name those who he believes are doing so.

In a recent interview with ERT state-run radio, the abbott called on the judiciary to intervene.

‘The smell of death’

“When there is the smell of death around us and they [certain monks] cannot smell it, not only on Mount Athos but also around the world, no one can turn a blind eye,” he said, noting that a clearly medical issue has been [wrongly] turned into a spiritual matter.

“Certain monks are lying, claiming to be Athonite monks or even members of the Esphigmenou brotherhood,” he said.

“This fanaticism, this rage, and putting curses on people indicate fanaticism, a spirit that is contrary to Christianity,” he told MEGA television.

Mount Athos has been hit hard by the pandemic, as dozens of monks have fallen ill and nine of them have died of COVID-19.

Contingents from the National Public Health Organisation have in the past visited Athos in an effort to stem the spread of the virus.

Athos has been a monastic colony for 1,000 years and although it is Greek sovereign territory it enjoys a status of autonomy. Considered a bastion of Orthodox tradition, it follows the Old Calendar and has a relatively high percentage of religious zealots.

Fanatical, anti-vax clergy have a strong presence in the social media and on You Tube and may have influenced thousands of more conservative and less educated Orthodox faithful, going as far as to urge them not wear masks.

One man who attended the 26 October celebration of Saint Demetrios’ feast day in Thessaloniki, when asked by a television reporter why he was not wearing a mask replied, “I am going to see the doctor [the saint]. When we visit the doctor we don’t wear masks.”

Religious zealots and the extreme right

Ultra-Orthodox clergy, who act or are viewed as spiritual advisors, and their followers, along the extreme right (which also claims to be religious), are two key groups that go hand-in-hand in the strong anti-vax front in Greece.

Northern Greece, where the Athonite peninsula is located, has the lowest vaccination rate in the country.

Though the Holy Synod of the Orthodox Church of Greece has taken a clear, pro-vax stance, it does not have authority over the Athonite monks.

Although they are under the jurisdiction of the Ecumenical Patriarchate, which has firmly supported vaccination, they have often clashed with the patriarchate due to the excesses of their religious zealotry on issues such as the Orthodox-Catholic dialogue.