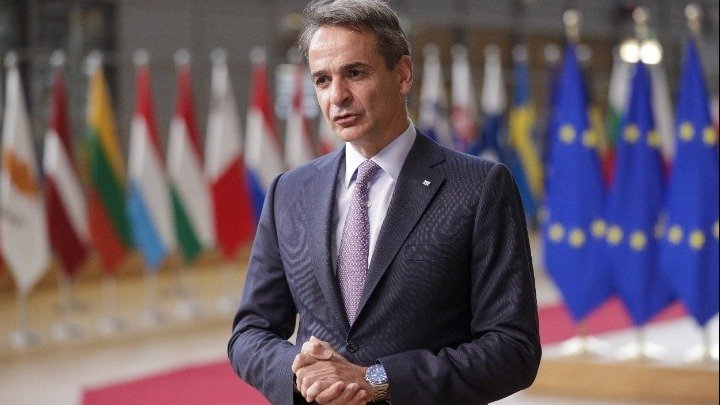 ‘If we want to be serious and substantial in guarding European borders I see no reason why interventions such as the works being conducted at [the Greek-Turkish border region wall] at Evros cannot be funded from the EU budget,’ the PM said.

Prime Minister Kyriakos Mitsotakis briefed the European Union summit on Turkey’s provocations in the Eastern Mediterranean, even as the leaders discussed Ankara’s implementation of Ankara’s agreement with the EU on migration.

“I had the opportunity to draw the attention of our partners to the great importance that the Mediterranean basin takes on as regards natural gas. The Eastern Mediterranean basin can give us cheap electric energy through the Greece-Egypt electricity link-up. In that context I explained to our partners the great importance of geopolitical developments in the Eastern Mediterranean. The quicker we can strengthen our production of renewable energy sources, the more swiftly we will reach a point of energy security,” Mitsotakis told a news conference after the summit.

“Now, whatever happens takes on much greater importance in the midst of an energy crisis,” he said.

“The conclusions of previous European Council meetings are still entirely in force. Turkey must choose between two paths – that of earnest cooperation or that of provocation. I think it realises the repercussions of continued provocations. Greece has proven that it is a force of legality in the Eastern Mediterranean.”

Mitsotakis said he was satisfied with the summit conclusions as regards the migration issue because, “Following our pressures there is a clear reference to the need for Turkey to abide by the EU-Turkey Joint Statement…and indeed the European Council calls on the Commission to propose legal changes with specific measures and funding for the more secure guarding of our borders.”

The EU-Turkey statement of 18 March, 2016, states that, «Turkey furthermore agreed to accept the rapid return of all migrants not in need of international protection crossing from Turkey into Greece and to take back all irregular migrants intercepted in Turkish waters. Turkey and the EU also agreed to continue stepping up measures against migrant smugglers and welcomed the establishment of the NATO activity on the Aegean Sea. At the same time Turkey and the EU recognise that further, swift and determined efforts are needed.»

«All new irregular migrants crossing from Turkey into Greek islands as from 20 March 2016 will be returned to Turkey. This will take place in full accordance with EU and international law, thus excluding any kind of collective expulsion. All migrants will be protected in accordance with the relevant international standards and in respect of the principle of non-refoulement,» the EU-Turkey statement notes.

“If we want to be serious and substantial in guarding European borders I see no reason why interventions such as the works being conducted at [the Greek-Turkish border region wall] at Evros cannot be funded from the EU budget,” Mitsotakis said, adding that in the conclusions that there is “a clear statement against the instrumentalisation of migrants and refugees, as Belarus is doing now.