They agreed that that the project is an important element in the strategic development of the Eastern Mediterranean Energy Corridor, creating an alternative source of energy supplies from the region to the EU and vice versa. 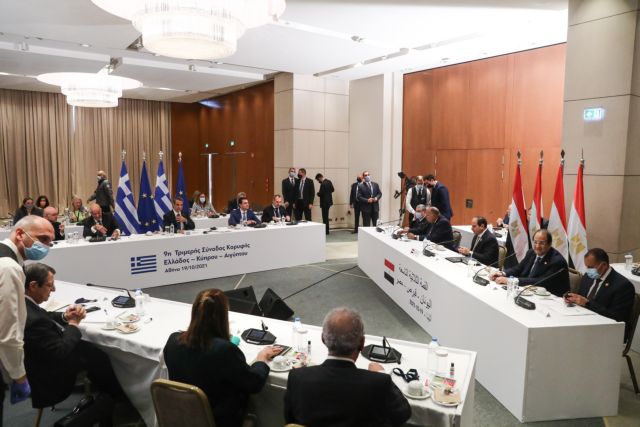 A joint declaration after the ninth trilateral summit between Greece, Cyprus and Egypt sent a strong, unified message to Turkey regarding its provocations and illegal in the Eastern Mediterranean and its illegal military intervention in Libya.

The leaders also emphasised that the electricity connection between the three countries can contribute to European energy security, but they also referred to the Turkey-Libya memorandum delimiting the two countries’ Exclusive Economic Zones, noting that it is legally null and void and undermines regional stability.

The three leaders discussed the signing of the electricity connection between their countries which they said “bolsters our economic cooperation and the security of energy supplies not only for the three countries but also for Europe, as the connection will create a channel of transportation of a large volume of electricity from and to the Eastern Mediterraneran”.

They agreed that that the project is an important element in the strategic development of the Eastern Mediterranean Energy Corridor, creating an alternative source of energy supplies from the region to the EU and vice versa.

The three leaders sent a message to Turkey that it must refrain from provocations and unilateral actions that violate international law, such as the harassment of seismic research vessels that have been licensed by Greece or Cyprus. They underlined that in an aggressive environment with the threat of violence one cannot conduct a productive dialogue that could produce results.

They also stressed the importance of “respect for the sovereign rights of all states in their EEZs in accordance with UN Convention on the Law of the Sea”.

They denounced illegal drilling and seismic research by Turkish vessels in Cyprus’ EEZ and continental shelf, in areas that have already been delimited in accordance with international law.

The three leaders condemned the constant Turkish violation of Greek air space and all other illegal acts in the area of Greece’s continental shelf.

Regarding Libya, where Turkey’ military intervention is extensive, the three leaders reiterated the importance of adhering to the timetable for holding free and fair elections on 24 December, without foreign intervention, and the need for the withdrawal of all foreign troops and mercenaries from the country.

They underlined that the illegal Turkish-Libya MoU on both military cooperation and on security cooperation that was signed in November, 2019, With Fayez El Saraj, in violation of international law and the UN arms embargo on Libya, “both undermine regional stability and, moreover, the MoU on the delimitation of areas of maritime jurisdictions in the Mediterranean violates the sovereign rights of third countries, does no abide by the [UN Convention on the] Law of the Sea, and cannot produce legal results”.