The incident comes less than a week after fascist and neo-Nazi hoodlums staged repeated attacks on students at a Professional Lyceum (EPAL) in Thessaloniki. 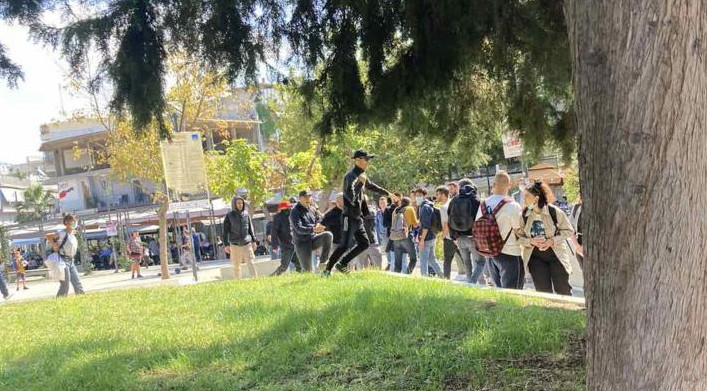 Police in Thessaloniki have remanded in custody 14 individuals in connection with a violent attack by groups of far right hoodlums on members of the Greek Communist Party Youth (KNE) who were distributing party pamphlets in Eleftherias Square.

The incident comes less than a week after fascist and neo-Nazi hoodlums staged repeated attacks on students at a Professional Lyceum (EPAL) in Thessaloniki.

Today’s attack intensifies concerns that Thessaloniki has become a hotbed of far right groups that are believed to be linked with the outlawed neo-Nazi Golden Dawn Party.

The spectre of Golden Dawn

The party last year was declared a criminal organisation by the Athens Appellate Court. Its leaders were convicted and received a 13-year jail sentence.

Eyewitnesses at today’s attack described it as “murderous” as the culprits delivered extremely powerful blows even to the heads of victims, who were distributing party leaflets and talking to passers-by.

Witnesses said the attackers were carrying thick chains and tasers and were wearing helmets.

According to local news outlets (thestival and grtimes) four people were injured, three of whom were taken to hospital by ambulance.

Nikoleta Theognostou a councilwoman in the local Mela-Stavroupolis municipality, said that the government is to blame for allowing fascist groups for days to wander around Stavroupolis and act with impunity.

Today’s incident comes straight on the heels of the Golden Dawn-style Stavroupolis attacks and after other attacks in the same area against anti-fascists, left-wing organisations, university students, and trade unionists.

The KNE members, who recently held their annual festival, were distributing pamphlets in the context of a major publicity push by the KKE Central Committee.

The campaign calls for the forging of a common front comprised of wage earners, the low income self-employed, youth and women in lower income brackets, pensioners, and academics and artists.

“Only the people can save the people through an upset” is the title of the party’s campaign.