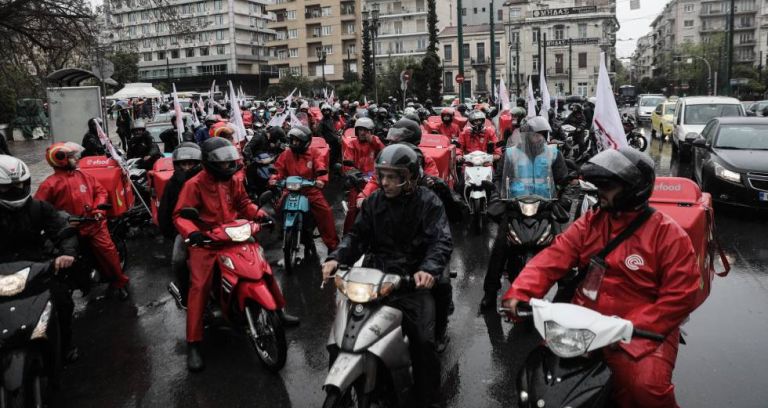 Employers fully exploited high youth unemployment and swiftly set up a courier mechanism, without offering the means for workers do their job or security.

When citizens remained at home during public health lockdowns they sought ways to cover a host of consumer needs.

Commercial enterprises in turn, from big chains to smaller shops, hastened to meet market needs, offering consumers the ability to make purchases from their homes and undertaking the cost of delivery.

The pairing of new technologies with traditional foot work jobs were undertaken by newly established enterprises that had the technological means to create contemporary electronic platforms that facilitated purchases, but without a sense of social responsibility regarding the low-skilled work of transport in absolutely dangerous urban traffic conditions.

They exploited to the max high youth unemployment levels and they swiftly set up a courier mechanism, without offering the means for workers do their job or security, with the lowest possible cost.

Within months in Greece, businesses recruited an army of thousands of “delivery boys” that frantically  sped with small motorcyles on the streets to deliver everything from coffees and food to clothing, shoes, appliances, and everything else, rain or shine and during heat waves

Yet, the wages offered by employers was extremely low and they justified that by claiming that workers’ income was supplemented by their paltry tips. There was an unprecedented demand for high-speed with as many deliveries as possible.

Employers exhibited horrible behaviour in the name of flexibility and speed, along with routine layoffs for petty reasons, as often occurs in emerging unregulated new markets.

There are countless incidents of arbitrary behaviour by employers, even cases of violence, which create an awful impression.

The common conviction is that these newly-established businesses do not in the least abide by labour law and do nothing to ensure the safety of their employees. They treat workers as expendable, second-class employees, without recognising their major occupational hazards.

Over time, intensifying competition and the thirst for maximum profits aggravated the situation with the arbitrary behaviour of employers.

The most recent example is that of efood, which with its flagrant blackmail of workers triggered a major social backlash, enraging everyone, including consumers.

The reactions of the public forced the company into a hasty retreat, and it offered full-time, indefinite contracts of employment.

It became clear that a situation of sweatshop-style employment – without rules and with employers rejecting the most basic obligations – could not be tolerated.

Labour must find the position and value that it deserves, especially because in the last decade it has clearly been degraded and inequalities are tending to grow.

These newfangled employers should know that without workers being allies and participants there can be no progress or economic recovery, but there can be useless tensions and socially disorganising clashes.