Theodoridou said the death today of a 44-year-old woman in the Thessaloniki area who died 14 hours after receiving a dose of the AstraZeneca vaccine was not thrombosis-related. 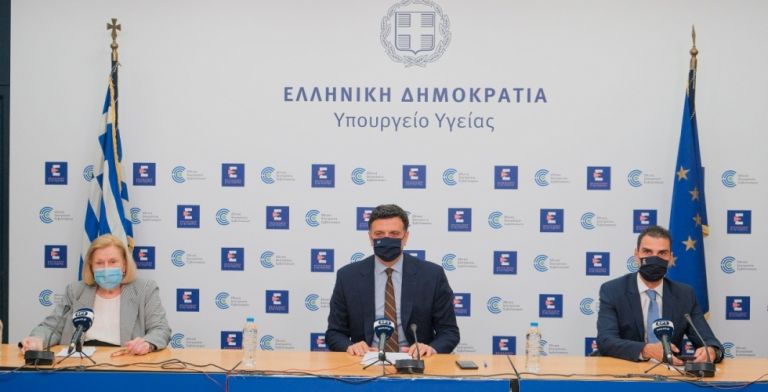 Health Minister Vasilis Kikilias touted the accelerating pace of the Covid-19 vaccine rollout at a weekly televised news conference today, even as Greece races to catch up with other European countries.

Greece ranks 26th out of 30 European countries in terms of the percentage of the population vaccinated with at least one dose (24.4 percent) according to ECDC data released on 5 May and published today by in.gr.

Croatia, Romania, Latvia, and Bulgaria are the only countries with a lower vaccination rate.

Kikilias announced that 2.3 million vaccine doses will be administered by the end of the month, bringing the total number of doses to five million (the vast majority being two-dose vaccines – Pfizer, AstraZeneca and Moderna).

«The target is to vaccinate all adults by end of June or the beginning of July,» he declared.

With the government having already announced that the country will open to international tourism on 15 May, Kikilias said the public health plan for the islands, which are of course a most popular tourist destination, will be announced in the coming days.

Younger Greeks the frontrunners in race for vaccination

National Vaccination Committee President Maria Theodoridou lauded thirty somethings for «their enthusiastic response» to the recent opening of vaccination appointments for citizens between the ages of 30 and 39.
She expressed the hope that «each one of these young people” can persuade and take a reluctant senior citizen to a vaccination centre.

Though the main high-risk group, a large percentage of people over the age of 65 have not made a vaccination appointment and that has been attributed by largely exaggerated fears of possible side-effects from AstraZeneca’s jab.
Theodoridou also welcomed the start of the rollout of Johnson & Johnson’s single-shot Covid-19 vaccine today, calling it an easy and convenient vaccine with between 77 and 80 percent protection against Covid-19.

The government plans to begin vaccinations of home-bound citizens with the J&J vaccine beginning on 15 May.

In addition, Theodoridou said that people should not rush to do antibodies tests to check the effectiveness of the vaccines, as antibodies are half of the picture in immunity. «There is also cellular immunity,» she noted and stressed that a negative antibodies test alone does not contribute to public faith in vaccines.

She also touched on the issue thrombosis incidents reported about some of the vaccines, noting that there has been only one such case in Greece.

Theodoridou took a question about the death of a 44-year-old woman in the Thessaloniki area who died 14 hours after receiving a dose of the AstraZeneca vaccine.

She asserted that her initial verbal briefing about today’s autopsy indicated that the woman’s death was not caused by thrombosis and appears to have been related to a heart attack after the vaccination, apparently her second. She said the case will be scrutinised carefully
The government aims to vaccinate at least 5.4 million people or 33 percent of the population with at least one dose by the end of May, the health ministry general secretary for primary health care Marios Themistocleous said.