Former alternate justice minister Dimitris Papangelopoulos has been accused by top prosecutors of raw interventions in their work and of pressuring them to file charges against former ND and Pasok ministers and two PMs. 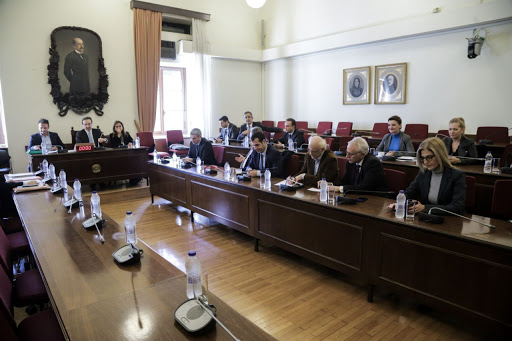 The second of two protected witnesses who had alleged that politicians had taken kickbacks from pharmaceutical giant Novartis did not keep a scheduled appointment with the parliamentary committee probing the handling of the Novartis scandal.

A woman who was given the name Ekaterini Kelesi as a protected witness failed to show up today to testify before the committee which has the powers of an investigating magistrate in probing possible criminal acts in the Novartis case.

The committee is investigating whether former alternate justice minister Dimitris Papangelopoulos committed crimes related to the Novartis probe. He has been accused by top prosecutors of raw interventions in their work and of pressuring them to file charges against former ND and Pasok ministers and two PMs.

Kelesi had made clear in advance that she did not wish to testify before the committee.

In a letter to the committee she cited an EU directive – pertaining to the protection of the confidentiality of whistleblowers’ identity – issued in October, 2019, and the joint ministerial decision establishing the protected witness framework in Greece, which she argued makes no provision for the examination of a protected witness, with his or her identity revealed, by members of a parliamentary committee, even if it has prosecutorial authority.

She forwarded a copy of her letter to Corruption Prosecutor Eleni Touloupaki, Deputy Supreme Court Prosecutor Lambros Sofoulakis, and the European Commissioner on Human Rights.

Yesterday the protected witness who was given the pseudonym Maximos Sarafis also failed to appear before the committee.

Sarafis had said that he wanted to testify under the condition that his name, physical characteristics, and voice are concealed.

Members of the Committee awaited the witness for three hours at police headquarters before deciding that he will be forcefully brought before them.

The disappearance of the protected witnesses and the subsequent inability of police to track them down according to critics raised questions about the competence of state organs.

The manner in which the witnesses will be examined triggered a battle royal in the committee between the ruling New Democracy majority which wants the witnesses to appear before them with their real name and their physical characteristics unconcealed.

The rationale, as articulated by lawyer and New Democracy MP Thanasis Plevris, is that just as the witnesses testified before a Supreme Court prosecutor without their identity concealed so too should they testify before the committee because by law it wields the powers of an investigating magistrate.

SYRIZA MPs on the committee demanded that the identity of witnesses remain concealed as otherwise the institution of the protected witness in Greece will be irremediably harmed.

Leaks from their testimony indicated that their allegations against politicians were based largely on hearsay and conjecture regarding the alleged kickbacks and the amounts.

One such reference by a protected witness was the claim that Novartis Hellas VP and director Konstantinos Frouzis visited then PM Antonis Samaras at his official Maximos Mansion offices with a wheeled suitcase full of cash. No evidence was brought to bear.

Protected witnesses also made references to kickbacks to ministers and stated that the pay-off “must have been” a certain specific amount of cash.

The Greek Communist Party (KKE) demanded the lifting of the protection of witnesses on the grounds that they forfeited it by not coming to testify.

Main opposition SYRIZA in a document sent to the Supreme Court Prosecutor Vasileios Pliotas requested that he exercise his oversight authority over lower court prosecutors and police authorities so as to block the illegal warrants for the roundup of protected witnesses.

If the protected witnesses cannot be found they will be asked to be cross-examined on their terms – with their voice, appearance, and names concealed.