‘Today the president of Turkey stated that he warned Greece’s leadership not to lay a wreath at Imia, implying that movements of the Oruc Reis were linked to the prospect of the Greek military approaching Imia,’ SYRIZA stated. 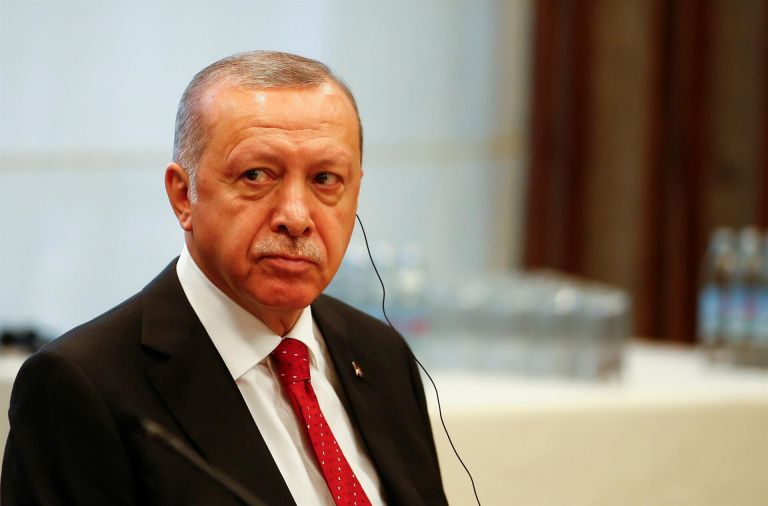 Main opposition SYRIZA slammed the government over its management of relations with Turkey and demanded that it respond to Turkish President Recep Tayyip Erdogan’s statement that he hopes that Greece does not approach Aegean islands the sovereignty of which Ankara disputes, just as the Greek military this year did not approach the Imia islets on the anniversary of the crisis that brought the two countries to the brink of war.

Erdogan was apparently referring to the action of former defence minister Panos Kammenos who in January, 2019, flew by helicopter near the Imia islets and threw a wreath with his name on it in honour of the three helicopter pilots who crashed near Imia while on a reconnaissance mission.

Since the 1996 crisis neither the Greek nor the Turkish military and civilians have set foot on the island.

SYRIZA on the domestic warpath

“Today the president of Turkey stated that he warned Greece’s leadership not to lay a wreath at Imia, implying that movements of the [research vessel] Oruc Reis were linked to the prospect of the Greek military approaching Imia. Indeed he noted that Turkish Defence Minister Hulusi Akar telephoned his Greek counterpart [Nikos Panagiotopoulos] to thank him for Greece’s stance vis a vis Imia and “to continue this process on the remaining islands”.

The Turkish ship on 31 January entered an area above the Greek continental shelf causing heightened concern in Athens, as it entered and exited areas under Greek sovereignty for many hours.

Diplomatic sources said that on 31 January when the Oruc Reis was sailing in the area of the Greek continental shelf and EEZ Turkey’s ambassador to Athens, Burak Özügergin, contacted the Greek foreign ministry to inquire whether Deputy Defence Minister Konstantinos Stephanis was planning to fly near Imia. It is unclear why Ankara specifically named Stefanis or whether it had intelligence about a possible move.

Initially, the Greek government said that winds had pushed the Turkish research vessel – eventually accompanied by two Turkish frigates – into the area of Greece’s continental shelf.

The government said the Oruc Reis was pushed westward by strong winds, which SYRIZA dismissed as false because a northwesterly wind was blowing

The captain of the Greek frigate “Nikiforos Fokas” repeatedly warned the Turkish captain that the vessel was in the area of the Greek continental shelf and that it must leave.

During the Turkish vessel’s stay in the area of Greece’s continental shelf PM Kyriakos Mitsotakis met with Panagiotopoulos and the Chairman of the Joint Chiefs of Staff, Konstantinos Floros.

Panagiotopoulos later said that Ankara was “testing the reflexes” of Greece’s political leadership.

In an unprecedented move, Panagiotopoulos publicly recounted his dialogue with Prime Minister Kyriakos Mitsotakis in which he said he advised the PM to keep a “calm”stance”.

“What do you advise, minister? Calm Prime Minister, a competition of calm and composure as I told you.”

Erdogan in a public statement slammed a Greek MEP elected with the neo-Nazi Golden Dawn party, Yannis Lagos, who tore up a colour photocopy of the Turkish flag, stunning MEPs in the European Parliament chamber.

“The colour of our flag is the colour of the blood of our martyrs. This [tearing the flag] is something that demonstrates weakness. We in contrast to this politician do not tear up the flag of a state and nation. We do not pursue results with such immorality and crassness. We answer through politics, our military struggle, the economy, commerce, and tourism,” Erdogan declared, noting that the move represents only the “unethical” MEP, not Greece,  and that no more time should be wasted discussing it.”

“There was no crisis Imia. Why? We had said that if a move was made near Imia as has occurred in the past, our response will be different. If Greece does not do something at Imia neither will we. My defence minister today will likely call his Greek counterpart to thank him, and for this process to continue with other islands,” Erdogan said.