Political struggles are desirable and necessary, but political culture is also something that has been gained. 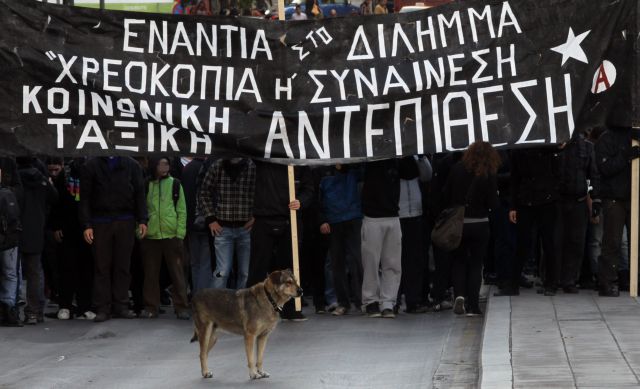 In the first years of the bailout memorandums, in the era of untrammelled populism and irrational demands, street politics flourished.

There was a prevalent atmosphere of tensions and invective and of a general condemnation of forces that were considered systemic.

Until 2012, when one saw signs of a restructuring of the political system, there were many clashes that produced extremely negative repercussions.

Since then and until the recent elections the supposed anti-systemic forces left the streets and occupied state posts to serve the needs of the new regime.

With the exception of certain marginal anti-authority forces which kept clamouring the rest focused on the work of the government and that led to an unprecedented atmosphere of social peace in the country for at least six years.

Some will counter that the conditions of pacification were the result of the Tsipras government’s policy of appeasement.

However, those in the know realise that the previous government enjoyed social peace simply because the political duties of certain groups and forces in the new left changed.

With the political change that resulted from the 7 July general elections, and even before the new government unveiled its plans, there were threats of a return to street protests and of a general mobilisation beginning in the autumn.

Already from the announcement of the government’s intention to abolish university asylum and to establish changes in tertiary education we saw in the first weak protests which signaled the “fighting “spirit.

If that spirit pans out there will be room for forces of unrest which aspire to exploit an untrammelled partrisan spirit beginning in the autumn.

One would expect that the Left’s experience in government over the last years would make its leadership more moderate and its reactions more logical and measured.
The main opposition now knows the complexity of the country’s problems and its need to peacefully proceed on the path to growth.

Political struggles are desirable and necessary, but political culture is also something that has been gained as we saw from the pictures with political leaders in the garden of the Presidential Mansion on the anniversary of the restoration of democracy [after the 1967-1974 Greek junta] on 24 July.

The value of social peace is critical and everyone must protect it.

That applies primarily to the leadership of the main opposition which came to power with the force of street protests but then established conditions of unhindered governance, even though its choices and decisions were not the best.

In short, a policy of a return to street protests is misguided under the current political and social conditions.

The Greek people have different priorities and expectations.

After a ten-year crisis the Greek people expect an environment of creativity and progress more than anything else.

The Greek people have learned what it means to engage in sterile struggles.