Among the nearly 180 countries on the CPI list, Greece ranks 67th, falling by eight notches from 2017, and is now at the same level as Senegal and Montenegro. 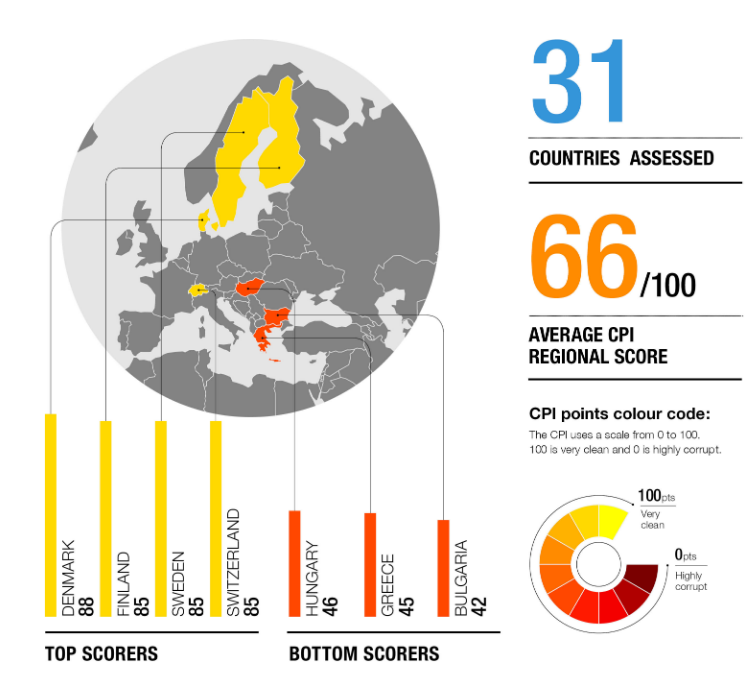 In a blow for SYRIZA and Prime Minister Alexis Tsipras, four years after they came to power on a clean hands platform, Transparency International has ranked Greece among the more corrupt countries, and the second most corrupt in Europe, after Bulgaria.

The report indicates that instead of improving the situation has worsened, belying the government’s promise to combat corruption and establish transparency in public life.

Transparency International ranks countries «by their perceived levels of corruption, as determined by expert assessments and opinion surveys”. The Corruption Perceptions Index (CPI) generally defines corruption as «the misuse of public power for private benefit» and ranks countries «on a scale from 100 (very clean) to 0 (highly corrupt)»

Among the nearly 180 countries on the CPI list, Greece ranks 67th, falling by eight notches from 2017, and is now at the same level as Senegal and Montenegro.

On the other hand, Germany has risen by one notch and is now tied with the UK for 11th place.

“Cross analysis with global democracy data reveals a link between corruption and the health of democracies. Full democracies score an average of 75 on the CPI; flawed democracies score an average of 49; hybrid regimes – which show elements of autocratic tendencies – score 35; autocratic regimes perform worst, with an average score of just 30 on the CPI. Exemplifying this trend, the CPI scores for Hungary and Turkey decreased by eight and nine points respectively over the last five years. At the same time, Turkey was downgraded from ‘partly free’ to ‘not free’, while Hungary registered its lowest score for political rights since the fall of communism in 1989. These ratings reflect the deterioration of rule of law and democratic institutions, as well as a rapidly shrinking space for civil society and independent media, in those countries,” Transparency International stated.

The result appears to belie the government’s narrative that it would combat corruption and would send big scandals to the judiciary so that those responsible would be put on trial.

Those promises proved false and big cases such as tax-evading Greeks on the so-called Lagarde list, the Siemens case, and the Novartis Affair were simply exploited for SYRIZA to reap partisan gains.

All of that contributed to SYRIZA losing the self-proclaimed “moral advantage of the left” as did other cases, such as that of Manolis Petsitis, who appears to have acted as a middleman between the PM’s office and convicted businessman Lavrentis Lavrentiadis, best known for his central role in the Proton bank scandal.

Concerns have been raised also about military procurement issues, such as a scuttled bid to sell munitions to Saudi Arabia and the alleged misuse of EU funds earmarked for refugees and migrants.

“Our country wants to be at the core of the European Union, but it is distant from the Western European average and from that of the European Union on the Corruption Perceptions Index. Consequently, as a country we must intensify our efforts to combat corruption so as not to allow it to further harm the quality of our democracy,” Damaskinou said.