Tsipras: Government to tear down 3,200 illegal buildings in Attica 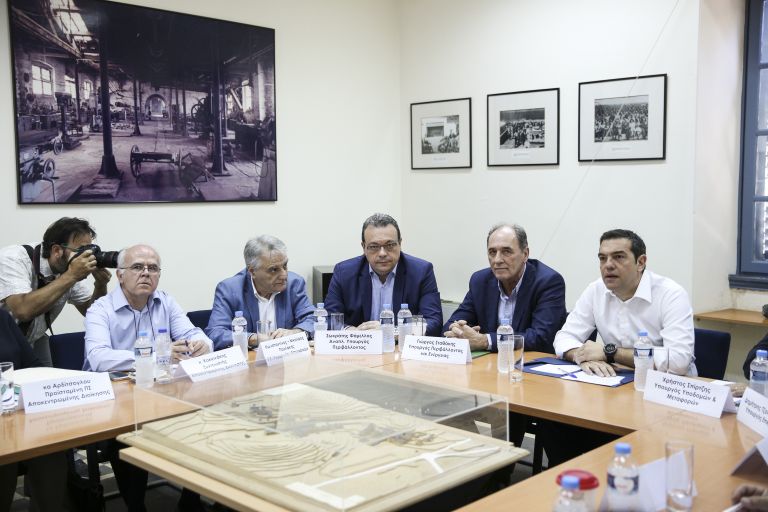 Share
Prime Minister Alexis Tsipras chaired a conference at the Technical Cultural Park in Lavrio, regarding planning and operations following the deadly wildfire in Mati.
Those participating in the conference include Environment Minister Yorgos Stathakis. Infrastructure Minister Christos Spirtzis, Alternate Environment Minister Socrates Famellos, Attica Prefect Rena Dourou, municipal officials, the heads of Attica’s forest rangers, the general directors of the Public Sector Land Company, and competent general secretaries.
After the meeting, Tsipras announced a series of immediate actions planned by the government to reconstruct fire ravaged areas and to avert a similar disaster in the future.
20 immediate interventions to protect constructed areas
Tsipras announced 20 immediate interventions to protect and check the constructed environment, both in Attica and nationwide.
He said these interventions aim at expediting implementation of a related law passed by parliament in October, and a series of new actions.
“The government will proceed immediately, based on a prioritisation of cases, to tear down 3,200 illegal buildings and constructs for which there are irrevocable decisions to tear them down. The task will be assigned to local government.
“Buildings that are on the coastline, on forest tracts or in national forests and on creeks in Attica, and which constitute an immediate threat to public security, will be razed. These 3,200 illegal buildings are in Attica, and the same will be done throughout the entire country,” Tsipras said.
The PM said these measures are part of a comprehensive plan to lay the foundations for confronting decisively the issue of unchecked construction throughout the country.
The PM said the focus will be on actions that confront and eliminate dangers to human life, but also protect in the best possible manner the incredible natural wealth of the country’s environment.
“The government is undertaking immediate action so that areas that have been stricken by the fires will be reconstructed extremely swiftly, but on a new foundation that ensures lawfulness, respect for the environment, and for the life of residents,” he said.
That will be implemented in all communities in the environs of Attica, the PM said.
Κορωνοϊός: Όλα τα εμβόλια διαθέσιμα στην ηλικιακή ομάδα 40-44 από τις 21 Μαΐου
Ακολουθήστε