The detained Golden Dawn MPs Nikos Michaloliakos, Christos Pappas and Yannis Lagos were taken to Parliament today, where the Assembly… 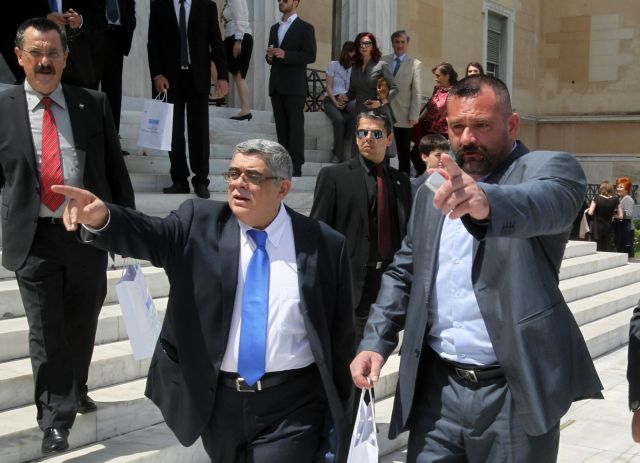 The detained Golden Dawn MPs Nikos Michaloliakos, Christos Pappas and Yannis Lagos were taken to Parliament today, where the Assembly voted in favor of lifting their parliamentary immunity.

In total, 224 MPs voted, with 223 voting in favor of lifting the parliamentary immunity of the three MPs and one voting “present” in the three separate cases. The three MPs may now face additional charges; illegal firearm possession in the case of Michaloliakos and Lagos and possession of illegal plans for Pappas.

The three MPs arrived in handcuffs under heavy guard at Parliament at 11:30, with about 200 hundred supporters of the neo-Nazi party rallying in Syntagma. Meanwhile, the judicial investigation into the criminal activities of the neo-Nazi party continues, with other MPs expected to submit their depositions in June.

Despite a ban on members of the public from attending the hearing in Parliament, a group of neo-Nazi supporters welcomed party leader Michaloliakos with the “blood, honor, Golden Dawn” chant. Golden Dawn supporters even performed an SS hymn outside Parliament, and when a number of MPs complained, the police did absolutely nothing.

The detained party leader entered parliament yelling “do not touch me, I am the leader of the third party in parliament, nobody touch me” to the police officers accompanying him. During his provocative speech in Parliament, the fascist party leader raged against the political system.

Michaloliakos spoke of the “Venizelos and Samaras dictatorship” and called the “sad minority government” to leave because it is dangerous for the country. The Golden Dawn leader claimed that two unnamed Ministers had secret talks with Golden Dawn MPs and made references to the director of the Prime Minister’s office, Giorgos Mouroutis.

Regarding the criminal charges against him, Michaloliakos admitted to owning an illegal weapon, which he claimed was for his personal protection, alleging that he is terrorist target and citing the shooting of two members of the neo-Nazi party in N. Iraklio.

Michaloliakos also claimed that New Democracy and PASOK should be prosecuted as criminal organizations for clashes of their supporters in the past and specifically named Makis Voridis during his tenure are leader of the pro-dictatorship nationalist EPEN party. The Golden Dawn leader concluded his torrent of accusations and threats against the political system by asserting that he is not afraid of prison and that his is “an unrepentant nationalist”.

The neo-Nazi party’s second-in-command Christos Pappas rejected the charges against him and claimed to be persecuted for his political belief and spoke of “sick, neo-democratic minds” conspiring against a legal political party. Pappas argued that New Democracy was trying to recruit members of his party, citing the Health Minister Adonis Georgiadis who stated that he would “prefer [his] son to be a Golden Dawn supporter, rather than a SYRIZA supporter and communist”.

Pappas argued that “Greece has a politically unstable Prime Minister” and also claimed that Antonis Samaras had asked about him during his detainment. He also professed that aside from Takis Baltakos, many more New Democracy officers have attempted to approach Golden Dawn, but his members remained true to their ideas.

Lagos was the final detained Golden Dawn MP to take the stand and stressed that Golden Dawn will prevail, by making references to the recent election results and arguing that “the trial will not happen” since “the so-called evidence is was based on hatred”. The MP claimed that there was a judicial bias against Golden Dawn and that “there is a gang pretending to be police officers, judges and prosecutors”.

In reference to the murder of Pavlos Fyssas, Lagos stated that he cannot be accused of inciting murder and that he is being punished for being a Golden Dawn MP. Lagos added that the head of Golden Dawn’s Nikea offices Giorgos Patelis was also being prosecuted “without reason”.

After the three detained Golden Dawn MPs finished their speeches in parliament, the Minister of Justice Charalambos Athanasiou took the stand and stated that the accused MPs would have a fair trial. Giorgos Mouroutis also stated that he has never met any Golden Dawn members or MPs, as alleged by Michaloliakos.