With Ankara having resisted Kyiv’s pleas to close the Dardanelles to Russian ships and Greece having taken a hard line on sanctions,, Lavrov in the last week has twice referred to Turkish-occupied northern Cyprus “Turkish Republic of Northern Cyprus.” 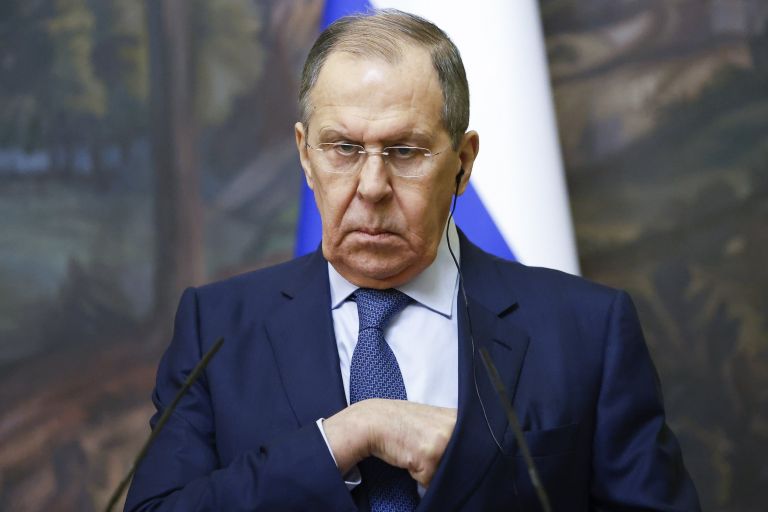 Russian ambassador to Athens Andrey Maslov has been summoned to the Greek foreign ministry tomorrow after the killing of 10 ethnic Greeks and the injury of six more in Russian bombings in Eastern Ukraine.

Earlier today, after the first two ethnic Greek civilians of the large Greek minority, numbering 91,000 according to a 2001 Ukrainian census, were killed, the Greek foreign ministry issued a strong condemnation of the attacks.

“Greece is appalled by and unequivocally condemns the bombing of civilians by a Russian aircraft on the outskirts of the village of Sartana earlier today, which resulted in the death of two Diaspora Greeks and the injury of six others, including a child. Upon instructions from the Minister of Foreign Affairs, Nikos Dendias, the [ministry] Secretary General Themistoklis Demiris made a strong protest demarche by telephone to the Russian Ambassador in Athens and summoned him to the Ministry of Foreign Affairs tomorrow. It is recalled that, during their recent meeting, the Minister of Foreign Affairs had emphatically raised with his Russian counterpart the issue of the need to protect Diaspora Greeks,” the statement read.

Lavrov’s reference to TRNC
The protection of ethnic Greek civilians in Ukraine is not the only thorn in Greece-Russia relations.

With Ankara having resisted Kyiv’s pleas to close the Dardanelles to Russian ships and Greece having taken a hard line on sanctions in concert with its NATO and EU allies, Lavrov in the last week has twice referred to Turkish-occupied northern Cyprus by the name of the breakaway state established there by Ankara, “Turkish Republic of Northern Cyprus.”

The references stirred the intense consternation of Athens and Nicosia, and it is not yet clear if it marks a permanent shift in the stance of Russia, which as a permanent member of the UN Security Council has over the decades since the 1974 Turkish occupation consistently supported the Republic of Cyprus in resolutions condemning Turkey.

Russia’s stance on the Cyprus problem is not much different to that of the US and NATO – that the two sides must sort it out on their own.

Moscow also does not look kindly on the vastly expanded and deepened US-Greece defence cooperation, as enshrined in the recent amendment to the US-Greece Military Defence Cooperation Agreement (MDCMA) which gave the US a base in the port city of Alexandroupolis, a move that also triggered Ankara’s intense consternation.

«The only conflict where one of the parties refuses to talk to the other, and this is fully supported by the West, is the conflict in eastern Ukraine. Just look at Cyprus and the Turkish Republic of Northern Cyprus. There is a negotiation process there, mediated by the United Nation,” Lavrov said in 21 February remarks at a meeting of the UN Security Council, where he defended Moscow’s recognition of Donetsk and Luhansk as republics.

In a Facebook post the next day, Lavrov again referred to occupied Cyprus as the TRNC, which is recognised only by Turkey.

«Look at Cyprus. The Turkish Republic of Northern Cyprus has been unilaterally declared in the North. It refuses to comply with UN Security Council resolutions, but no one denies the representatives of Northern Cyprus the right to participate in the dialogue,” the post read.

Ankara’s false pretext for the 1974 invasion of Cyprus was the protection of the Turkish minority on the island, which was unharmed, just as Moscow is now justifying its war against Ukraine by speciously invoking a “genocide” against Russians in Ukraine.