Tsipras combines olive branch to Turkey with message of decisiveness

‘We do not negotiate. We do not bargain. We do not cede even a millimetre of territory, from Didymoteiho to Gavdos, and from Othonous to Kastelorizo. Naturally, Greece does not threaten anyone, but it also is afraid of no one’ 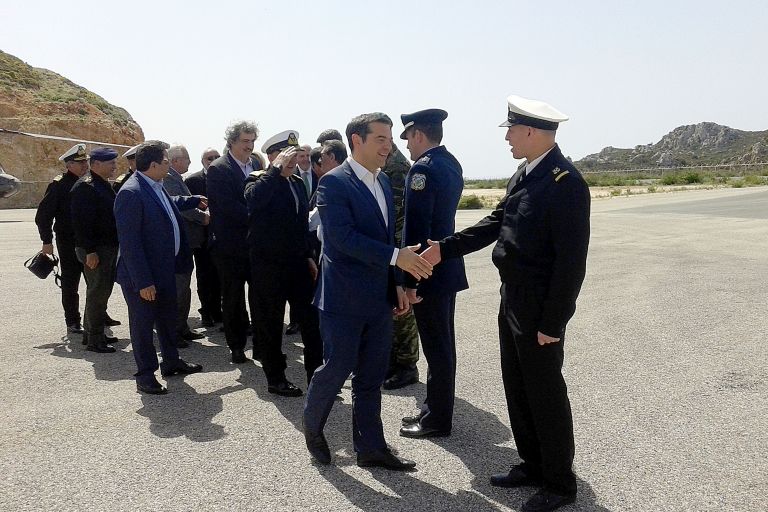 Prime Minister Alexis Tsipras’ visit to Kastelorizo today was imbued with a dual symbolism, the one geopolitical and the other economic.

The charming border island was the venue where then PM George Papandreou announced Greece’s subjection to an IMF bailout programme, and Tsipras used it as a backdrop to highlight the expectation that the era of bailout memorandums is coming to an end, after eight harsh years.

But Kastelorizo is also a critical point of reference in Greek-Turkish relations, as Ankara denies that the inhabited island has its own continental shelf, which effectively links the Exclusive Economic Zones of Greece and Cyprus, with its rich hydrocarbons deposits.

The PM was accompanied by the Chairman of the Joint Chiefs of Staff, Admiral Evangelos Apostolakis.
Striking a positive note, the PM extolled the cooperation between citizens of border regions such as Kastelorizo and Turkish citizens on the other side, but noted that leaderships at times fail to follow suit.

Tsipras underlined that Greece is able to defend its sovereign rights and territorial integrity.

“We do not negotiate. We do not bargain. We do not cede even a millimetre of territory, from Didymoteiho to Gavdos, and from Othonous to Kastelorizo. Naturally, Greece does not threaten anyone, but it also is afraid of no one,” Tsipras said in nationally televised remarks.

The prime minister also referred to fallen Greek Air Force pilot Yorgos Baltadoros, who died when his fighter jet crashed into the Aegean on 12 April.

“We had the misfortune to lose one of our best pilots,” he noted, underlining that Baltadoros has entered the “Pantheon of our heroes”, a phrase used by Defence Minister Panos Kammenos in announcing the pilot’s death on Twitter.

Tsipras said that Turkish PM Binali Yildirim’s condolence call was a good will gesture, in the vein of understanding that should be continued.

While on Kastelorizo, Tsipras inaugurated two desalination units long-awaited by the islanders.