“The key for resolving the name issue is realism, pragmatism, and the realisation that we must make compromises – not rotten compromises, but compromises that produce a win-win situation,” Kotzias said. 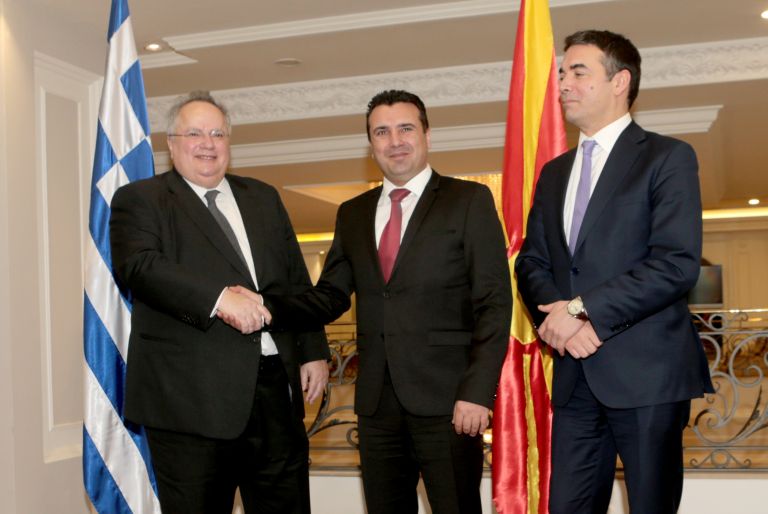 “We took the steps that we could today, positive steps, and we continue to hope we can make easy the difficult and larger issues. Nikola and I were confronted by the big and difficult issues. We are trying to solve problems that were created in other eras and by others, but that is the task of diplomacy,” Kotzias said, noting that there will be meetings on 3-4 May in Thessaloniki and on 11-12 may in Attica.

“The framework of common actions and cooperation resulted from very good diplomatic work. For us, the issue of irredentism is very serious. The closer we come and the more issues we resolve, there are ever fewer topics for discussion, but these are the most difficult,” Kotzias said.

Dimitrov also noted progress on the name issue and said that the two sides discussed a timetable for the first time.

“We had very honest discussions on all the issues related to the name. On some issues there is progress, and on others there are still differences. For the first time we discussed the time-frame, and the further steps if an agreement is reached. We shall inform our prime ministers and the process will continue,” Dimitrov said.

Kotzias had issued a call for a bold compromise on both sides on the eve of today’s FYROM naming talks, which many believe will determine the prospects for a settlement.

“The key for resolving the name issue is realism, pragmatism, and the realisation that we must make compromises – not rotten compromises, but compromises that produce a win-win situation,” Kotzias said.

The key compromises that Athens is asking Skopje top make are a revision of the FYROM Constitution to remove irredentist references against Greece, and a guarantee that the country’s new name will apply domestically and in all of FYROM’s foreign relations, including bilateral.

If significant progress is made, a meeting between FYROM Prime Minister Zoran Zaef and PM Alexis Tsipras, to possibly clinch a deal, is in the offing.

Kotzias is on a Balkan tour, which yesterday included a visit to Belgrade, where President Aleksandar Vucic extolled the historically close Greek-Serbian ties, and Athens’ support for the territorial integrity of Serbia.

Greece to date has not recognised Kosovo as an independent state.

Kotzias’ Balkan tour will continue with a stop in Kosovo, for discussions with the president, Hashim Thaci, immediately after the Ohrid talks.

A third of FYROM’s population is of ethnic Albanian descent.