The discussion of Greek-Turkish relations comes amidst a harsh war of words between Ankara and Athens, with each side referring to the other’s military defeats in Greek-Turkish military confrontations historically, and with no end in sight to the captivity in a Turkish prison of two Greek army officers. 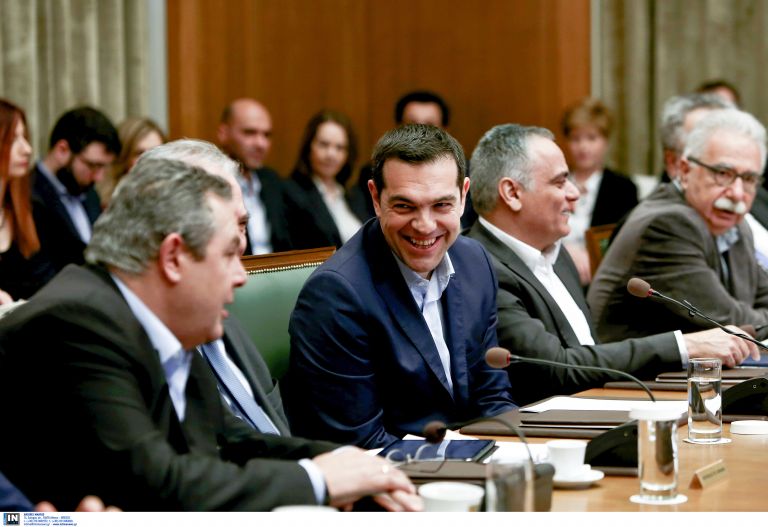 The full array of crucial foreign policy and economic issues were on the agenda for today’s cabinet meeting, called by Prime Minister Alexis Tsipras amidst mounting tensions with Turkey and developments in the FYROM naming negotiations.

This was the first briefing of the cabinet after progress was noted in a series of meetings between Foreign Minister Nikos Kotzias and FYROM Foreign Minister Nikola Dimitrov. The Greek demand that Skopje amend its constitution to enshrine the new name and remove irredentist references remains an intractable issue, which for now appears to be an obstacle to a settlement.

The discussion of Greek-Turkish relations comes amidst a harsh war of words between Ankara and Athens, with each side referring to the other’s military defeats in Greek-Turkish military confrontations historically, and with no end in sight to the captivity in a Turkish prison of two Greek army officers, without any charges having been filed against them.

On the economic front, the fourth and last bailout evaluation, and the dozens of outstanding preconditions required to complete it, was the main focus, amid reports that creditors are concerned about delays in the implementation of key reforms.

Full speed ahead on reforms

Tsipras called on his ministers to speed up reforms and remain vigilant, keeping their eyes on the prize of exiting the last bailout memorandum, during a nationally televised address to his cabinet.

“We are in the final stretch in implementing the objective that brought us to govern the country, the exit from trusteeship and the end of bailout programmes,” he said.

The PM also sought to explain and to some degree paper over the recent disputes on foreign policy with his coalition partner, Independent Greeks leader and defence minister Panos Kammenos.

“Let us not forget that this government was constituted by parties with different ideological starting points, but with one central political objective: the secure and definitive exit from memorandums and a suffocating supervision, and the recovery of our economic sovereignty,” Tsipras said.

The prime minister once again dismissed opposition parties as corrupt and responsible for the bankruptcy of the country, even as he insisted that the next general elections will be held at the end of the government’s constitutional term, in September, 2019.

In the remarks to his cabinet, Tsipras called on Turkey to release the two Greek army officers who are imprisoned in a maximum-security jail in Edirne without any charges having been filed against them.

The prime minister said Turkey should “abandon its aggressive rhetoric, and proceed as soon as possible with a good will gesture, to return the two Greek officers who have been incarcerated in Edirne”.

Tsipras requested that judicial procedures be expedited in order to hasten the return of the officers to Greece.
“This is a move that we are waiting for. We shall be patient. Let everyone understand that they are being judged, both by us and by the international community,” he said.

Tsipras noted that Ankara has of late heightened its provocations, and is aggravating the situation in bilateral relations on all fronts.

“For our part, we are continuing to exploit any influence that we have. The stern message from the European Union towards Turkey is an important development,” the PM said.

The prime minister underlined the importance of striking a settlement with FYROM and with Albania so that Greece can normalise relations with the two countries on its northern border, so as to husband Athens’ diplomatic capital, and to focus on dealing with and transcending problems with Turkey.

Tsipras stressed the need for national consensus so as to strengthen Athens’ hand in dealing with critical issues of foreign policy.

“I believe that on issues of foreign policy, a stance of indiscriminate and sterile [domestic] confrontation is harmful, not for the government, but for the entire country,” he underlined.

“I want to assure the Greek people that Greece is a strong and secure country. There is no cause for alarm. We are not threatening anybody, and we are not afraid of anybody. Our neighbours should abandon their aggressive rhetoric. Let them put aside the attacks, and proceed as quickly as possible with a good will gesture: the return of the two Greek army officers being held in Edirne,” the PM said.