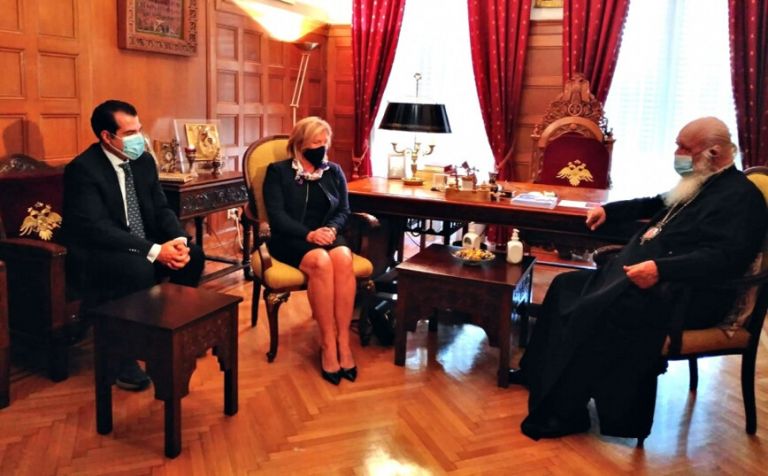 A statement released by the archdiocese noted that the Church is called upon to assist the State on health issues in a framework of cooperation on a matter that is mainly the task of the latter.

Ieronymos and the Holy Synod, over which he exercises great influence, have consistently supported public health measures and the vaccination rollout, but the same cannot be said of many Metropolitan bishops and priests nationwide.

The archbishop himself contracted the virus and was hospitalised in 2020. He recovered fully and has been a steadfast proponent of vaccination.

In August, the health ministry conducted a pilot programme for the vaccination of faithful outside of a few select churches with mobile vaccination units.

A number of Greek experts, however, have since the beginning of the pandemic been critical of the reluctance of many clerics to enforce public health regulations, turning church services into COVID-19 superspreading events. A substantial number of Metropolitan bishops and priests have fallen gravely ill from the virus and a number have died.

The Holy Synod, however, in late July instructed priests nationwide to read at Sunday services an encyclical with questions and answers – drafted by experts – to allay the fears of the faithful and promote vaccination.
“Christians ask and our doctors answer” was the title of the encyclical “to the people”, which offered answers to 12 questions covering the main concerns of those who fear or are wavering over vaccination.

The meeting comes four weeks before the major feast day of Thessaloniki’s patron Saint Demetrios, on 26 October, when thousands traditionally flock to the church dedicated to him.

The celebration last year was a major COVID-19 superspreading event as it drew huge crowds of people who lined up without masks or social distancing, and that was believed to have been yet another factor leading to the devastating impact of the epidemic on Thessaloniki and northern Greece more broadly last year.

Today, Thessaloniki and northern Greece more broadly are experiencing a major flare up of the epidemic and hospital ICU’s in the northern port city are 90 percent full.

Thessaloniki has already at the beginning of October been characterised as a red zone on the country’s epidemiological map, largely due to the exceptionally low vaccination rate in the area.

The government is determined to avert a repetition of last year’s debacle, though neither the ministers nor the archbishop referred to the matter in statements after their meeting.

‘The Church has helped the state’

Plevris thanked the archbishop and the Church for its assistance during the pandemic and its contribution to pushing the vaccine rollout.

“Together, the Church and State will help citizens to get through this,” he said.

In a statement after the meeting, Gaga said that the Church has helped the state and that the minister discussed with the archbishop possible initiatives.

“We must work together with solidarity for the good of everyone,” she said.

A statement released by the archdiocese noted that the Church is called upon to assist the State on health issues in a framework of cooperation on a matter that is mainly the task of the latter.