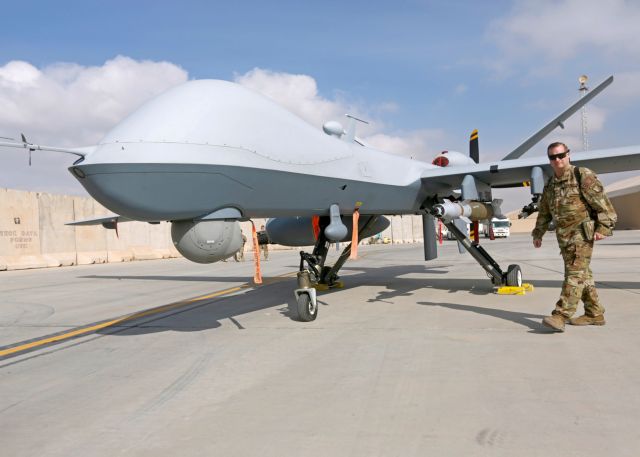 FILE PHOTO: U.S. Air Force officer passes in front of a MQ-9 Reaper drone, one of a squadron that has arrived to step up the fight against the Taliban, at the Kandahar air base, Afghanistan January 23, 2018. REUTERS/Omar Sobhani/File Photo
Share

There is a pressing need for rapid decisions geared towards smart defence. This cannot be limited to the future construction of Greek drones. It demands the immediate procurement of such weapons.

In mid-October, Defence Minister Nikos Dendias is scheduled to visit Washington for the signing of the revised US-Greece Mutual Defence Cooperation Agreement (MDCA).

Athens has pinned high hopes on the agreement, which has been described as an “expansion of the American imprint” on Greece and has been viewed as a guarantee of sorts in managing the threat from Turkey.

Meanwhile, it is undoubtedly positive that US Senator Robert Menendez, chairman of the Senate Foreign Relations Committee, is greatly expediting the US-Greece defence agreement.

Unfortunately for Greece, however, as regards relations with Turkey, time is not on Athens’ side.

The Turkish economy may be gasping for breath and in need of a boost every so often. Hopes may be expressed that an Erdogan defeat in the next presidential election – which is scheduled for 2023 – will be favourable for achieving a more permanent defusing of Greek-Turkish tensions. Yet, those who rely on such scenarios in fashioning a strategy for deterring Ankara seem to be missing the big picture.

Even if Erdogan were suddenly to disappear for the front line, it is very likely that such an eventuality would bring greater instability to our region instead of calming the waters.

What is worse for Greece is that the Turkish defence industry is developing at a rapid pace.

It may have been a tortuous process for the Greek Navy to procure torpedoes needed for its submarines, but we have not yet been able to devise a solution for the procurement of frigates.

Even worse, a solution on how to respond effectively to one of Ankara’s most serious strategic advantages – the acquisition of the requisite technology for producing drones – is nowhere to be seen.

Greece is lagging far behind in this area.

There is a sense that as regards the procurement of both drones and anti-drone technologies, Athens has not make the appropriate moves.

According to reports in creditable foreign websites that focus on defence issues, the Turkish defence industry plans to develop new drones that will take off from the mini aircraft carrier “Anadolu”, which is currently under construction.

Consequently, Ankara must find another solution, as the flight deck of the “Anadolu” lacks the requisite length to accommodate classic fighter planes.

There is also information about the construction of an unmanned anti-submarine vessel – beyond the unmanned ULAQ surface vessel – which obviously bolsters the capabilities of the Turkish Navy.

The conclusions from the deployment of drones in the 44-day war between Azerbaijan and Armenia in 2020 – which ended in the crushing defeat of Erevan in the clash over Nagorno-Karabakh – are fresh and unsettling.

That does not mean that Greece is defenceless, but it does mean that there is no room for delays.

There is a pressing need for rapid decisions geared towards smart defence. This cannot be limited to the future construction of Greek drones.

It demands the immediate procurement of such weapons from countries with cutting-edge technology.

For those who seek a quid pro quo for the facilities that Greece offers its allies, such as the US and Israel, that is where they must focus their attention.