In Greece, pawn shops were associated with the darkest moments of Greek national life, the Nazi occupation, so much so that people would turn away when they passed by them. 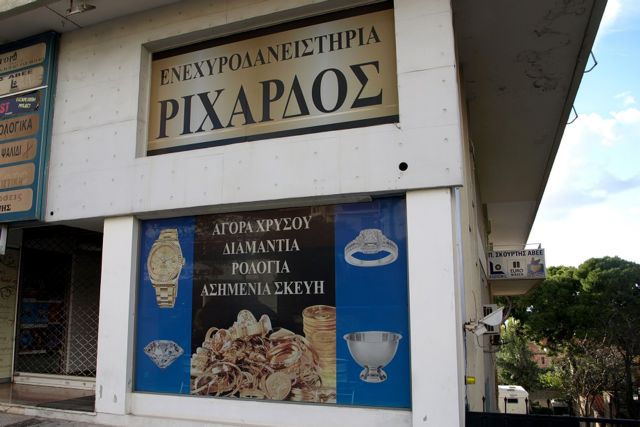 Those with a longer memory of Athenian life remember pawn shops as a symbol of a bygone era of decline, remnants of the Nazi occupation and mostly of repugnant black marketeering, which have been registered in a dark manner in the collective consciousness of citizens.

In those hellish years, hungry Athenians pawned their wedding rings, jewelry and the memories of an entire lifetime to secure bare sustenance.

In short, pawn shops were associated with the darkest moments of Greek national life, so much so that people would turn away when they passed by them.

All that has been recorded in post-war Greek cinema, most poignantly in the film “Spanking came from heaven” (To Xilo Vgike apo ton Paradeiso), through which playwright Alekos Sakellarios rendered the surname Giadikiaroglou – to whom the ladies of Athens’ posh Kolonaki neighbourhood would turn to exchange their jewelry for a few beans or chickpeas – synonymous with contempt and abuse.

Despite all that, the dread pawn shops were destined to return to the limelight.

Since the first years of Greece’s great and ongoing economic crisis, such stores mushroomed, despite the reactions of local societies.

Unfortunate fellow citizens who lost their jobs and incomes reached the ultimate point of poverty. Left with no other choice, they turned to the detestable “gold traders”, who under the nose of police and with the obvious toleration of the state developed and organised a literally and absolutely criminal market.

With time, the interlinked pawn shops were transformed into places of illegal transactions and became a haven and an open invitation to robbers as they fenced stolen valuables.

A vicious circle of burglaries and robberies and of the open sale of stolen goods by legalised “gold traders” gradually developed, with incalculable and largely unknown consequences for society and citizens.

Recent revelations by Greek Police are indicative of the problematical nature of the tolerance exhibited until recently by successive crisis-era governments and other forces, which in the name of advertising offered legitimacy and legalisation to a criminal network.

Unfortunately, there are more loci of economic crime which still enjoy cover and protection.

The cases of Folli Follie and Aegean Petroleum are not dissimilar.

These, too, are cases of heinous, immoral, and unprincipled trade practices. They offend and defame Greece and render the country untrustworthy.

What is worse, while the international press is buzzing with these abuses and Greece and its businesses are constantly be dragged through the mud, no one cares in a country where ridiculousness thrives.

There is abundant envy and spite for absolutely successful and transparent entrepreneurial efforts, which adorn the Greek business community, making it equal with international economic giants.

A characteristic example is the recent – impressive in the international maritime annals – merger of Evangelos Marinakis’ Capital Product Partners with an American company in the same sector, DSS Holdings, in which Wilbur Ross, the US Commerce Secretary, holds a business interest. The agreement constitutes an oasis of hope amidst a wide range of bad news and difficult prospects for the Greek economy.

The deal was internationally received as a major and distinctive development which created one of the biggest fuel transport companies in the world.

In Greece, it was viewed with hate, as if it were a routine, everyday transaction.

That is obviously the result of envy, resentment and small-mindedness, as well as of the vested interests of those in power and their supporters, with many reprehensible versions of commerce.

If we allow jealousy and contempt to prevail, however, and if manufactured lie supplant truth, then all hope will have been lost.