Relations between the left-wing prime minister and the moderate archbishop have been exemplary, and Ieronymos’ recent statement that does not support rallies on the FYROM naming issue is the latest indication. 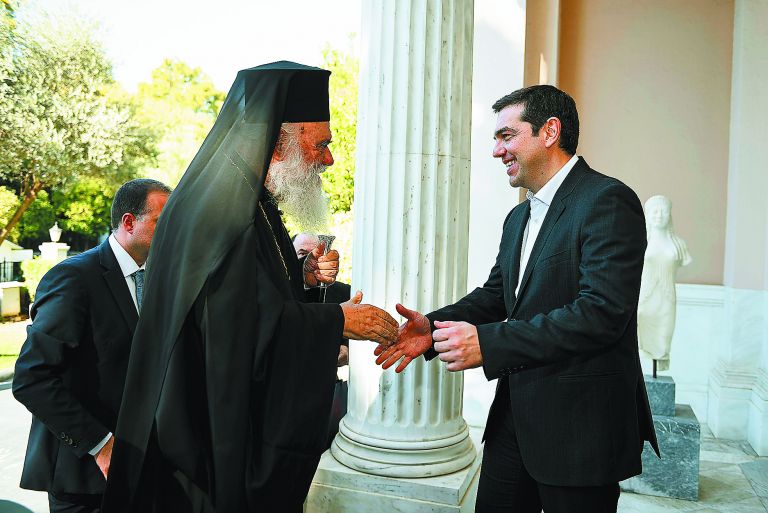 In a lengthy letter that was made public, Prime Minister Alexis Tsipras responded yesterday to Archbishop Ieronymos’ demand that the government not accept use of the name Macedonia, by the schismatic Orthodox Church in FYROM, in any settlement with Skopje on the naming issue.

Relations between the left-wing prime minister and the moderate archbishop have been exemplary, and Ieronymos’ recent statement that he will not support rallies on the FYROM naming issue, as the church had in 1992, is the latest indication of that.

Ieronymos, in a letter to the PM the previous day, outlined how the Orthodox Church in Skopje has traditionally been used as a vehicle for irredentist aspirations, ever since it broke away from the Patriarchate of Serbia, which historically was the canonical church authority in present-day FYROM.

Separation of church and state key

Tsipras’ reply underlined the need for national unity and the need to respect the discrete roles of church and state.
He said that the government is determined to address the issue, “with a sense of national responsibility and unswerving defense of the national interests, by pursuing peace, cooperation and friendship with all peoples of the region”, and noted that this approach is in accord with the Orthodox Church’s emphasis on peace between individuals and peoples.

“We shall seriously take into account all that you mentioned on the ecclesiastical aspect of the affair. Most importantly, we shall handle the responsibility assigned to us by the Constitution and the choice of the Greek people, in a spirit of dialogue and national unity,” Tsipras said.

The prime minister’s assurance that he will take into account the ecclesiastical issue is the first public indication that the government is negotiating toward a more comprehensive bilateral settlement, and not only about a FYROM name change.

The other issues that must be addressed regard how the language and ethnicity of FYROM’s citizens will be described, and the removal of all irredentist provisions and statements in FYROM’s constitution and schoolbooks, which call the historical Greek province of Macedonia, where the Kingdom of Macedon was centred, Aegean Macedonia.

The concept of Aegean Macedonia in FYROM has for decades been linked to nationalist, irredentist aspiration for a United Macedonia, which would include the Greek province.

“I trust that you will agree, as a matter of principle, that national issues required the broadest possible national unity. National unity is grounded on prudence, dialogue, and respect for differing views, but also on the discrete roles [of church and state]. It is undermined by shrieks, expressions of prejudice, and extremism, all of which in the past led to national defeats, in the name of the nation,” Tsipras underlined.

FYROM church a vehicle of irredentism

In his initial letter, Ieronymos described an historical pattern in Balkan countries, in which national churches were used as the core to build a state around the church. This, he said, was done by the late Yugoslav leader Josip Broz Tito, who encouraged the local church to break away from the Patriarchate of Serbia, in 1958 and 1967.