Prior action omnibus bill approved by Parliament with 153 votes

The debate on the critical omnibus bill containing a series of prior actions, necessary for the conclusion of the bailout review… 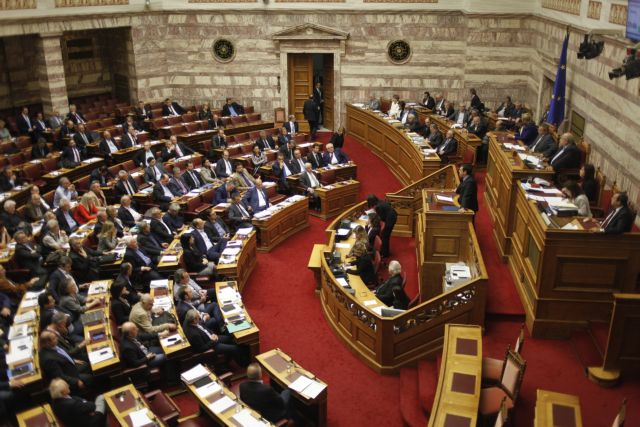 The debate on the critical omnibus bill containing a series of prior actions, necessary for the conclusion of the bailout review, culminated on Sunday evening with a roll call vote in Parliament.

The bill was approved with 153 MPs from SYRIZA and the Independent Greeks supporting the bill, while 145 MPs from the opposition voted against – MPs Grigoris Psarianos and Adonis Georgiadis were absent for the vote.

Although there was no real doubt as to whether the bill would pass, SYRIZA MP Vasiliki Katrivanou voted against the articles regarding the privatization ‘super fund’ and the contingency mechanism.

After he decision to vote against the bill, Mrs. Katrivanou later announced her resignation from her position as MP. In her statement she argued that a perpetual supervision was in place, making it difficult to exercise policy. Given that she cannot thing of any reliable alternative, she decided to step down. She will be replaced by the next runner-up in her constituency Giorgos Kyritsis.

The government and opposition parties locked horns in Parliament ahead of Sunday’s critical vote. The main opposition leader Kyriakos Mitsotakis accused the Prime Minister of being a liar and unreliable, arguing that ‘organized political fraud’ was taking place.

Prime Minister Alexis Tsipras responded that while the opposition leader likes to present himself as a reformist he has not actually made any such reform proposals. Later on PM Tsipras underlined that this last set of measures is proof that Greece is achieving its goals, with the talks on debt finally taking place.

During his speech, the leader of the Independent Greeks Panos Kammenos also stressed that these are the last measures voted in Parliament and that the Greek people’s efforts will begin to pay off. The Secretary General of the Communist Party Dimitris Koutsoumpas dismissed the government claims that the measures will be the last ones to be voted, adding that there is no shortage of lies.

Similarly, the head of the Democratic Alignment Fofi Gennimata argued that the vote was a “humiliating page in Greek history” and that the bill essentially makes the bailout permanent. The leader of the River Stavros Theodorakis accused the government of causing billion euros worth of damages to the Greek people and the country is on its way to becoming a new “Argentina”.

Finally, the President of the Union of Centrists Vasilis Leventis noted in his speech that it was “shameful” for the Greek Parliament to approve legislation composed by the IMF and Europe “without even changing a single comma”.