After a marathon meeting on Saturday, the Prime Minister Alexis Tsipras did not manage to reach an agreement with the… 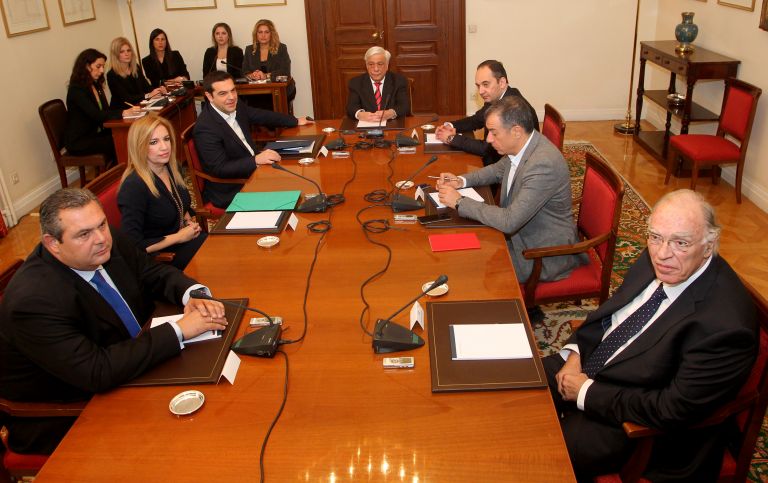 After a marathon meeting on Saturday, the Prime Minister Alexis Tsipras did not manage to reach an agreement with the opposition leaders on the pension system reform and constitutional review.

The leaders of New Democracy Yannis Plakiotakis and PASOK Fofi Gennimata rejected the proposal for the formation of intergroup committees for the pension reform and constitutional review. Similarly the leader of the River Stavros Theodorakis was critical of the Prime Minister’s stance when he was in the opposition and accused the SYRIZA/Independent Greeks coalition of not having an goals r people to support its choices.

As such, the coalition government will have to submit its draft proposal for the pension reform in parliament by early January, with the risk of losing additional MPs. The leader of the Union of Centrists Vasilis Leventis appeared to be the most conciliatory during the meeting and although he did not offer his outright support, he criticized the other opposition leaders for undermining the consensus for the sake of personal political gains. On his way out of the meeting Mr. Leventis expressed his disappointment over the PM’s decision to not go ahead with his proposal to form a national unity government.

In a statement issued by the President of the Hellenic Republic Prokopis Pavlopoulos after the meeting, the leaders reached an agreement in relation to the refugee crisis. The Greek political leaders agreed that the European Union must cooperate with Turkey and provide the necessary support to create a stable and reliable mechanism for the management of the refugee flow towards Europe.

Following the meeting, the Prime Minister made a statement where he blamed the opposition parties for the failure to reach a consensus on the critical issues, arguing that they did not rise up the expectations. He also noted that since 2010 both New Democracy and PASOK have voted and approved 11 different pension cuts and accused “those who have the exclusive responsibility for the financial, institutional and moral annihilation of the Greek people over the past five years” of putting their political survival above the interests of employees and pensioners.