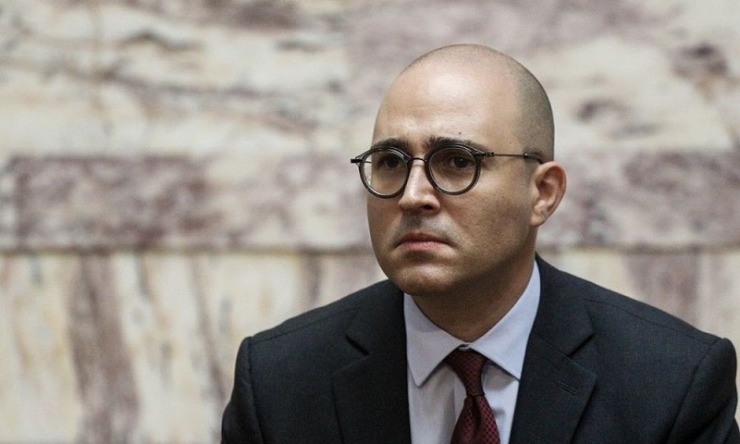 Bogdanos has fervently and vociferously pushed a tough law and order agenda, along with vitriolic attacks on the left in general, and main opposition SYRIZA in particular.

Athens lower court chief prosecutor Sotiria Papageorgakopoulou today ordered a probe of the publication of the names of children at an Athens kindergarten which was published on a website linked to New Democracy MP Konstantinos Bogdanos – meaculpa.gr – and retweeted by the MP.

Without concealing the names of the children, the website published the list with the name of the teacher and was critical of the fact that the large majority of pupils had foreign names and were the children of refugees or migrants.

The website was reportedly owned Bogdanos until 2019, when he reportedly transferred it to his wife when he was elected to Parliament due to a conflict of interest.

It is still considered, if not an outright mouthpiece, to reflect the views of the MP, who is a regular columnist and has made a name for himself politically by launching vitriolic attacks against undocumented migrants, particularly in Athens First Electoral District which he represents and which has a dense concentration of migrants.

He has also fervently and vociferously pushed a tough law and order agenda, along with vitriolic attacks on the left in general, and main opposition SYRIZA in particular.

The prosecutor’s office will cooperate with the Greek Police electronic crime unit in order to track down the source of the leak and will then investigate whether other individuals were also involved in handling the computer files.

In his retweet, Bogdanos declared that the vast majority of names were foreign children.

Bogdanos beat a fast retreat when the affair spurred intense criticism of the MP from top members of the ruling conservative New Democracy Party, from the government spokesman to former foreign minister Dora Bakoyannis, a top cadre and sister of the prime minister.

Tasoulas reportedly expressed his condemnation of the unprecedented action.

The Speaker had previously received a letter signed by the secretary of main opposition SYRIZA’s parliamentary group, Olga Gerovasili, who requested that he launch relevant disciplinary procedures as provided in the parliamentary code of ethics.

“An article posted on the website meaculpa.gr bore the title “The shocking catalogue of students at an Athens kindergarten” in which the names of students and the teacher were made public. The publication of the private data of an exceptionally sensitive age group – as the telling title of the article makes clear – constitutes a clear expression of racist hatred and of targeting of toddlers who are not of Greek descent,” Gerovasili stated.

“Moreover, the said website until recently belonged to MP K. Bogdanos, and it appears to have now been taken over by his wife. Beyond that, he continues to have a radio show with the same title, “meacupa.gr”. In his social media accounts he posted the aforementioned article and after the backlash he hastened either to ward off attacks with talk of the existence or not of the post, or even to threaten journalists who criticised him.”

In a fresh tweet after he was blasted by top ND cadres, Bogdanos posted the following tweet in which he attempted to dissociate himself from the website, but at the same time announced that it had promptly fired the person responsible for the post.

“Yesterday a mistake was made, which was corrected and there was an apology. The site, which does not belong to me, today ceased its collaboration with the person responsible for it. My mistake was that I did a retweet which I did not check, believing that the report had changed. All the rest is the product of cunning.”

The website itself issued an announcement admitting that a mistake was made but chalked it up to the assertion that it was taken from other social media accounts.

“When mistakes are made, they should be corrected. On the [website] shift tonight, due to a slip there was published a catalogue [list of toddlers’ names] which although it appeared and circulated in the social media, had no place in a news outlet. It was removed immediately when the blunder became apparent.”

Government spokesman Yannis Economou swiftly launched a damage control operation in which he firmly dissociated the government from the ruling party MP’s action.

“It is the non-negotiable policy of the government to guarantee the human rights of everyone, especially of minors. It is self-evident that all party cadres should follow this principle. Mr. Bogdanos’ action was wrong and not befitting the principles and values of New Democracy.”
.
Final warning to Bogdanos?

In line with other party cadres who feverishly offered assurances that such an egregious political act will not be repeated in the future, although for now the MP got off with a rather firm slap on the wrist, Economou declared that, “analogous mistakes in the future will not be tolerated.”