Theodorakis has left this veil of tears bequeathing a global legacy 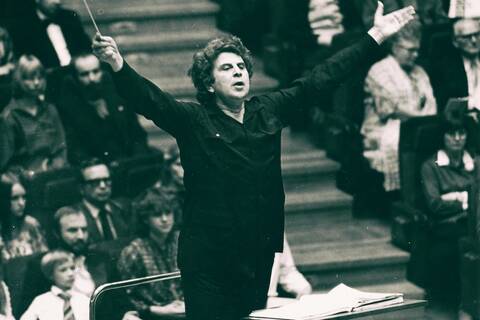 A man never dies until his name is no longer spoken. If that be true than Theodorakis will live forever not just in Greece, but around the world

Mikis Theodorakis has passed away and left a huge gap in the soul of Greece. His music and his compositions brought not just his songs but the best of Greek poetry into every Greek home. And yet he was also a source of inspiration for a host of foreign artists.

Perhaps, the works most translated into foreign languages are those of the Mauthausen trilogy.

The “Mauthausen Trilogy” is a cycle of four arias with lyrics based on poems written by Greek poet Iakovos Kambanellis, a Mauthausen concentration camp survivor, and music  by Mikis Theodorakis. It has been described as the “most beautiful musical work ever written about the Holocaust,” and as “an exquisite, haunting and passionate melody that moves Kambanellis’ affecting words to an even higher level”.

In May 1988, the world premiere of the “Trilogy” at the Mauthausen concentration camp in Austria was attended by then Austrian chancellor Franz Vranitzky and tens of thousands of Europeans. The ballad was conducted by Theodorakis and sung by Maria Farandouri in Greek, Elinor Moav in Hebrew and Gisela May in German.

In May 1995, Theodorakis conducted a repeat concert of the ballad at the camp to mark the 50th anniversary of its liberation from the Nazis. Before the concert Simon Wiesenthal made a speech, which was included in the Mauthausen Trilogy CD. The Mauthausen Cycle is one of the best known compositions inspired by events at the Mauthausen concentration camp, it is popular in Israel, and has been used to promote peace and cooperation worldwide. In 1991, the Philharmonic Orchestra of Israel conducted by Zubin Mehta performed the work as part of the Athens Festival.

Niki Jacobs also sung The Ballad of Mauthausen in Dutch

The song “Antonis” from the ballad has been used by the Kurds as musical background in a video showing Kurdish women fighting at Kobanî during the Syrian Civil War. The song was also sung by the residents of Kabul in 2001 as they greeted troops of the Northern Alliance in Afghanistan entering the city and expelling the Taliban. The aria of “Antonis” was the music theme of Costa-Gavras’s 1969 film Z, whose soundtrack won a BAFTA Award for Best Film Music in 1970.

Theodorakis was also well loved in Sweden and was a favorite of assassinated Prime Minister Olaf Palme At the political funeral of Olof Palme. Aria Saijonmaa sung the song called ” Einai megalos o kaimos”(following instructions of Palme’s will).

But also the fab four, The Beatles recorded the theme tune to the 1959 film Luna De Meil (Honeymoon) for the BBC radio show Pop Go The Beatles. https://youtu.be/9kuxs8Ipgvw