‘We shall make changes in our economy that concern us… I want o change the framework of Greece-Germany relations,’ PM Kyriakos Mitsotakis declared. 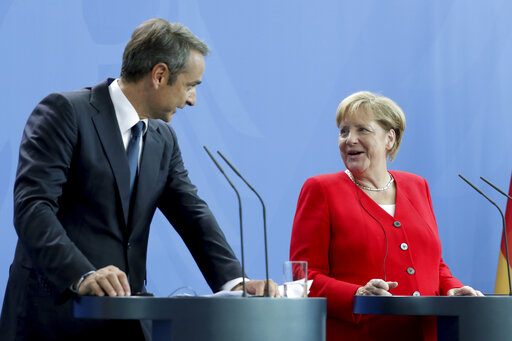 German Chancellor Angela Merkel has said that Greece’s fiscal commitments will now be easier to meet.
Merkel was speaking at a joint news conference in Berlin, where Mitsotakis was on an official visit.

The chancellor said that she discussed bilateral relations as well as the improved economic climate in Greece.

“We spoke about the prime minister’s economic policy, which he presented to me, as well as about improving bilateral relations. We also spoke about the migration issue. We both support the implemenation of the [March, 2016] EU-Turkey statement on migration,” Merkel said.

“We shall make changes in our economy that concern us… I want o change the framework of Greece-Germany relations,” Mitsotakis declared.

“We are examining with Germany a green development plan which we will present to the chancellor in December,’ the PM underlined.

He noted that Athens has presented its roadmap for attracting more investment and added that Greece is exiting the crisis.

Mitsotakis said he discussed the expansive investment programme on green development and environmental protection which Greece and Germany are jointly preparing.

“At the beginning of 2020 we shall unveil a plan for a green economy and environmental action,” Mitsotakis said.

Speaking about the migration issues, Mitsotakis stressed that Greece’s borders are the borders of Europe and he requested European solidarity in guarding the borders as EU countries who first receive the migrant cannot possibly shoulder the entire burden.

Regarding the Greece-North Macedonia Prespa Agreement, Mitsotakis said it has many faults which can be ameliorated during the long course of North Macedonia’s EU accession negotiations.

He said that constitutes a ray of light for all of Europe.