“Greece is not alone on the great issues that concern her and this is all the more true on the migration issue,” Avramopoulos declared. 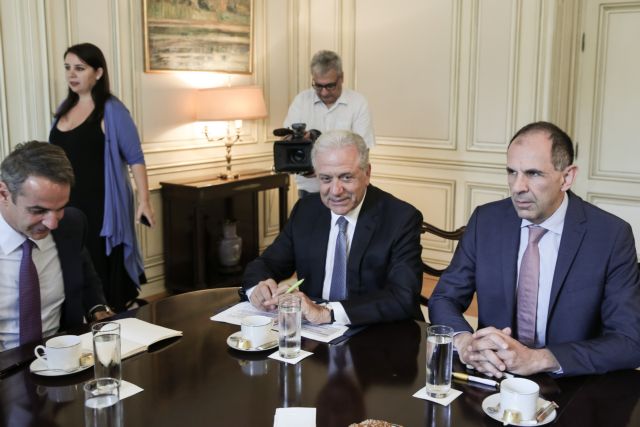 Prime Minister Kyriakos Mitsotakis set improved living conditions for refugees and migrants and the more effective patrolling of Greek and EU borders as the top priorities for the government in dealing with migration at a meeting in Athens today with European Commissioner for Migration Dimitris Avramopoulos.

Mitsotakis then met with the competent ministers to set priorities in dealing with the refugee and migration issues.

At the meeting six priorities were set and the PM asked his ministers to pursue them with the technical assistance of the European Commission:

1. Immediate improvement of living conditions for refugees and migrants in Greece with a particular focus on vulnerable groups and above all unaccompanied children.

2. Enhanced guarding of the common Greek and European borders, especially maritime borders, with a new, comprehensive plan that will place the European force under Greek command with clear operational rules of engagement. The plan provides for the best use of EU Frontex forces, intensification of Hellenic Coast Guard patrols, an upgrading of material and technical equipment, and full and transparent utilisation of European funds.

3. An overhaul by the end of 2019 of the institutional framework for granting international protection (asylum) aiming at issuing asylum more swiftly, justly, and effectively.

4. More faithful implementation of the March, 2016, EU-Turkey Statement on migration in order to manage migration flows and to lighten the burden on the Aegean islands.

5. Completion of work on the reception and identification centre on the island of Samos in order to ensure dignified and secure living conditions for refugees and migrants.

6. Incorporation of EU directives regarding the country’s security policy.

Speaking to journalists upon his departure from the PM’s office Avramopoulos said that the situation in the broader region was discussed and that despite greater migrant flows the situation remains under control.

“Given the government’s willingness to address the issues it is certain that management of migration will be even more effective in the future,” he said.

“Today we held the first formal meeting between the European Commission and the new Greek government on the issue of migration. One laid out the situation prevailing recently in the broader region which is under control, yet [migrant] flows continue. We must be better prepared for the future, and the government through the PM offered the European Commission assurances in this regard,” Avramopoulos said.

“Greece is an important agent of stability in the broader region. This great issue which is with us for good will be managed in the best possible manner,” he added.

‘Greece is not alone’

“Greece is not alone on the great issues that concern her and this is all the more true on the migration issue,” Avramopoulos declared.

“The country went through difficult moments as regards migration but given the government’s will to address the issues it is certain that the management of the migration issue will be more effective in the future,” he underlined.
“Greece is here with solidarity and responsibility and the European Commission stands by her.”