Tsipras’ central strategy is to deconstruct New Democracy’s main campaign narrative, that by lowering taxes one can spur a surge of investment that will create an economic take-off and create hundreds of thousands of well-paid new jobs. 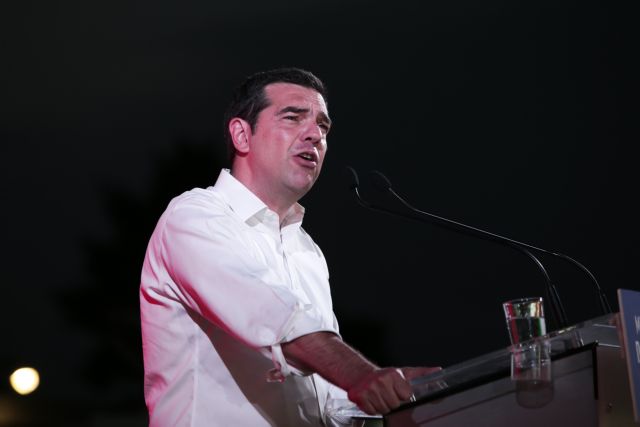 As it enters the last stretch of the campaign in a general election that all polls indicate it will lose, SYRIZA’s main strategy is to depict New Democracy leader Kyriakos Mitsotakis and his party as a force that will bring a restoration of neo-liberal austerity policies.

Tispras is on the one hand blaming New Democracy and the Samaras government for implementing policies dictated by Greece’s creditors but on the other hand he is arguing that those policies are ideologically in line with the views of Greece’s conservative party.

As he did in the European Parliament election, Tsipras himself is taking the lead in the campaign for the simple reason that despite all his broken promises and tragic policy errors –  especially in the first six months of his first term but also in an economic policy (as Finance Minister Euclid Tsakalotos conceded) of over-taxing the middle class to help those at or below the poverty line, while at the same time slashing public investment that would normally provide a critical growth momentum – he remains the most recognisable asset of a party that was garnering at best five percent of the vote before being swept to power on a wave of popular outrage.

Even his staunchest opponents do not deny Tsipras’ communications skills and his track record as a crafty tactician.

Tsipras has undertaken a media blitz that is unprecedented for Greek prime ministers with almost daily television and radio interviews in which he follows the cardinal rule of political communication -hammering one or two issues which are clearly conveyed to the public until they are fully ingrained and which are used to turn the opponent’s main advantage into an Achilles’ heel.

In that context, Tsipras’ central strategy is to deconstruct New Democracy’s main campaign narrative, that by lowering taxes one can spur a surge of investment that will create an economic take-off and create hundreds of thousands of well-paid new jobs.

In countering the conservative narrative, which is not all that different from Reaganite trickle-down economics, SYRIZA’s main argument is that in order to pay billions of euros that the tax cuts will cost ( it estimates 5bn euro) New Democracy will essentially have to dismantle the social state and in particular health, education, and social benefits for vulnerable social groups.

The fact that markets have responded positively to the prospect of a transition of power to a market-friendly conservative government – as evidenced in the decline of the spread on Greek bonds and a rally on the Athens stock exchange, albeit in part because Tsipras pre-election social spending spree alarmed creditors and markets which fear a serious fiscal  derailment – has lent credence to ND’s arguments that it can bring growth with market-friendly reforms, as difficult as those will be to bring to fruition with a monstrous bureaucracy and as much as they may restrict labour.

Reorganising a monstrous and inefficient bureaucracy has been a mantra in parliamentary election campaigns for decades, and both the electorate and the markets are well aware of the intractable problems that even a government with great resolve will come up against.

Tsipras’ tactic attempts to exploit anti-right wing voter reflexes that were once strong in Greek society but have waned dramatically as a citizenry battered a decade-long depression has come to believe, not unreasonably,  that the main parameters of the country’s economic policy are set by Greece’s creditors, and that the room to manoeuvre with within that framework is exceptionally limited.

Moreover, the operation to depict Mitsotakis as a cross between Margaret Thatcher and a social Frankenstein’s monster has been marked by great and at times grotesque hyperbole.

Tsipras’ recent declaration that New Democracy’s programme “smells of blood” is the most egregious example.

What SYRIZA has latched onto is Mitsotakis’ record as Administrative Reform Minister in the Samaras-Venizelos government between June, 2013, and January, 2015, at the height of the crisis when creditors were demanding mass layoffs.

In that period, thousands of civil servants were placed under a status of “availability” which was widely viewed as the ante-chamber to redundancy and it was essentially a way to circumvent civil service tenure or permanency.

The only way to lay off civil servants was to abolish a service or category of employees, as was done for example with municipal police

It was at that time that ERT state television was closed and over 2,000 employees were laid off.

However, Mitsotakis has said that no civil servant will be laid off if he comes to power.

He has also pledged hiring in certain sectors such as police and healthcare, to temper the impression that he will hire only one civil servant for every five that retire, which SYRIZA underlines will represent a serious blow to the social state – health, education, and other sectors.