Mr. Tsipras has a tendency to highlight the supposed scandals of others and to justify his own pompous behaviour as he retains the privilege of judging everyone. 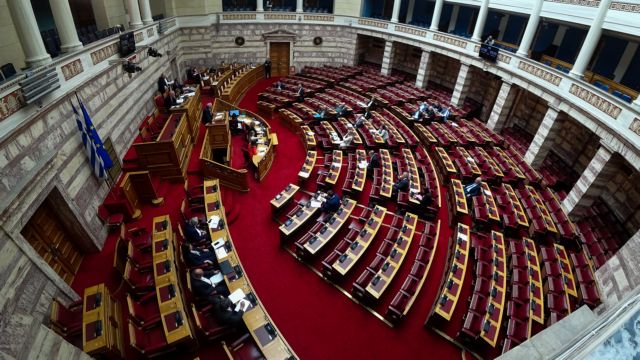 The gutter-level exchanges at the end of yesterday’s debate are a disgrace for the country’s political life.

The clashes were beyond the pale with a ping pong of personal attacks.

A parliamentary debate was turned into a cesspool which confirmed the degeneration of political life and benefited only the enemies of democracy.

The result is the degradation of political mores and the push to annihilate one’s political opponents, in large measure due to the scandal-mongering of the government and its easy targeting of everyone and everything over the last four years.

Prime Minister Alexis Tsipras at the start of the debate raised tensions with sarcastic remarks and jibes and main opposition leader Kyriakos Mitsotakis lashed back at the PM accusing him of hypocrisy.

Mr. Tsipras has a tendency to highlight the supposed scandals of others and to justify his own pompous behaviour as he retains the privilege of judging everyone.

He chose to insult, attack, and unleash easy charges against the opposition and was paid back with the same coin, even as his MPs thunderously applauded him.

In the end, everyone was left with a bitter aftertaste and disgust for politics.

The political class, and especially Mr. Tsipras, is responsible for what is in store for us.

Our political culture and democratic tradition do not permit such unscrupulous behaviour.

When the PM’s stance toward vested interests was challenged he became enraged and lost any sense of measure.

The transfer of power is an integral part of democracy – it is enshrined in our Constitution and no one is entitled to imperil it. Those who are in power must understand this.

There comes a time when the will of the people changes and is enforced at the ballot box.

When that happens, polarisation and tensions cannot change the course of events.

The government must reconcile itself to this reality. That will be better for them and for the country.