Erdogan’s spokesman, Ibrahim Kalin, underlined yesterday that Ankara will not tolerate de facto situations in the Eastern Mediterranean and the Aegean. 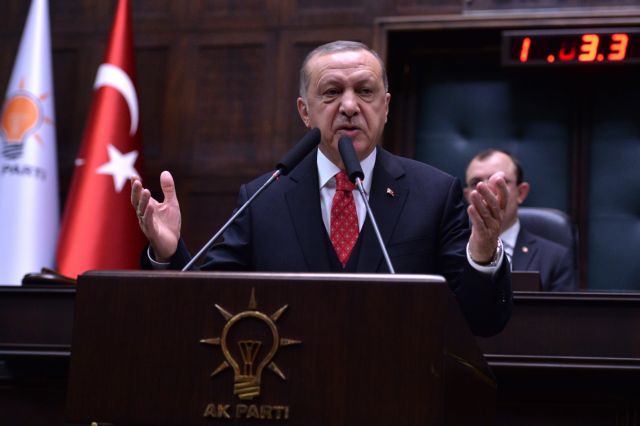 epa07344864 Turkish President Recep Tayyip Erdogan (C) addresses members of ruling Justice and Development Party (AKP) at their group meeting at the parliament in Ankara, Turkey, 05 February 2019. During the meeting, Erdogan said that 'if terrorists in Manbij town, Syria, are not gone in few weeks, our waiting will come to its end.' On 07 January US National Security Advisor John Bolton stated that US troops would not leave Syria until Turkey agrees not to attack Kurdish forces in the country. EPA/STR
Share

Just hours before Prime Minister Alexis Tsipras’ talks with Recep Tayyip Erdogan, Ankara undermined the climate by declaring a bounty on eight Turkish military officers (accused of taking part in the failed 2016 coup against Erdogan) who have been granted asylum in Greece.

The move signaled that Erdogan would place the issue high on the agenda, although he knows that the Greek Supreme Court has ruled against extradition of the eight to Turkey.

Although Tsipras in an interview with Turkey’s state-run Anadolu wire service extended a hand of friendship to Ankara, certain people on the Turkish side appear to want to dynamite the climate.

In that context, Erdogan’s spokesman, Ibrahim Kalin, underlined yesterday that Ankara will not tolerate de facto situations in the Eastern Mediterranean and the Aegean.

“Everyone must know that Turkey will not accept any de facto situation, especially in the Eastern Mediterranean,” he said.

Kalin laid out Turkey preconditions for turning the Mediterranean into a “sea of peace”. “Natural resources should be found and exploited on an equal basis,” he said, referring to the energy and offshore gas drilling programme of the Republic of Cyprus. That suggests that Ankara wants the Greek-Cypriot majority and the Turkish-Cypriot minority in the Turkish-occupied area to divide eventual energy revenues equally.

He declared that Turkey will continue decisively defending its “sovereign rights” in the Aegean, Cyprus, and the Black Sea.

The Tsipras-Erdogan talks are being held at a time that Turkey is confronted by difficult fronts in Syria and Iraq.

Domestically, the Turkish economy remains in recession, and Erdogan faces crucial local elections, which some believe explains his aggressive rhetoric.

Main opposition New Democracy leader Kyriakos Mitsotakis told members of  his shadow cabinet today that, “Not only we but all Greeks are anxious about Tsipras’ trip to Turkey.”

Mitsotakis stressed that Ankara’s decision to declare a bounty on the eight Turkish officers tramples over Greek law and rulings of the Greek judiciary, which have granted them asylum.

“Unfortunately, our concerns have been confirmed very swiftly. This visit on the Greek side has been poorly prepared and is ominous for Greek interests and Greek-Turkish relations. The government is undertaking a huge responsibility,” said New Democracy’s shadow foreign minister Yorgos Koumoutsakos, who was foreign ministry spokesman during the Karamanlis administration.

Greece has adopted a low-key approach to the Tsipras-Erdogan meeting.

Government sources say that as regards the reduction of tensions in the Aegean, Athens has already made it clear that it will defend its sovereign rights both militarily and diplomatically.

Naturally, defusing tensions in the Eastern Mediterranean over Cyprus’ energy programme was a top priority for the PM in discussions with Erdogan.

That is tied to the prospects of reviving settlement talks on Cyprus, which analysts believe might come after Turkey’s local elections.

As always, the government is underlining that Greek-Turkish relations will be placed on a sound footing only when they are based on respect for international law.

High on Tsipras’ agenda was jump-starting the Greek-Turkish exploratory talks that began when former PM George Papandreou was foreign minister. In dozens of meetings since then the two sides have stuck to their longstanding positions on Aegean issues.